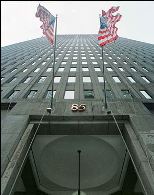 Financial services firm Goldman Sachs has started a $500-million initiative to support small businesses across the United States, with legendary investor Warren Buffett as an adviser.

The '10,000 Small Businesses' is a $500-million initiative that will unlock the growth and job-creation potential of thousands of small enterprises across the US through greater access to business education, mentors and networks and financial capital, Goldman Sachs said.

Besides Buffett, the advisory council of the initiative include Goldman Sachs CEO Lloyd Blankfein and Michael Porter of Harvard Business School.

Meanwhile, citing people familiar with the matter, the Wall Street Journal said, "the new program is likely to be looked upon favourably by the Federal Reserve - Goldman's primary regulator."

This is likely to be the second big charitable commitment made by financial services major this year. In October, the firm had announced a $200 million contribution to the Goldman Sachs Foundation.

In 2008, Goldman had launched its 10,000 Women effort to provide business education to women in emerging markets.

Regarding Goldman's role in the credit crisis the WSJ said, quoting Goldman's chairman and chief executive Lloyd Blankfein, "We participated in things that were clearly wrong and have reason to regret. We apologise."