With signs of green shoots showing in economies worldwide, India Inc's appetite for overseas acquisitions got a fresh lease of life with Reliance Industries' estimated $10-12 billion offer for a controlling interest in bankrupt LyondellBasell Industries. 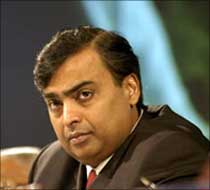 The deal by India's largest private sector company controlled by Mukesh Ambani, if closed, will make it one of the largest petrochemical outfits in the world. It will also be the second largest overseas acquisition by an Indian company, after Tata Steel bought Corus for $13 billion in 2007.

RIL has enough money power to make the deal happen. It has $4 billion in cash and $8 billion in treasury stocks, besides a favourable 0.35:1 debt-equity ratio. It also raised $660 million through treasury stocks sale recently.

In the year to October, Indian comanies acquired overseas assets worth $586 million, a sharp fall from the $13.06 billion in the same period a year ago, according to data from Grant Thornton Deal Tracker.

HSBC believes outbound activity will bounce back. About 70 per cent of HSBC's pipeline is outbound transactions, which has remained the same as the previous year's.

"Indian firms are now well capitalised, are trading at circa 20x multiples, offshore markets are trading at a discount to India and financing is more readily available to Indian corporates than to competing offshore acquirers."

Anjani Kumar, executive director, head of M&A India, ABN AMRO Global Banking and Markets, says the proportion of inbound deals (foreign firms acquiring Indian assets) may have gone up of late, but the debate is largely rhetorical as a couple of large deals could skew the picture completely. The RIL bid for Lyondalle, if it succeeds, will do exactly that.

As of now, however, the proportion of inbound M&As in total M&A deals has increased sharply as global multinationals look for opportunities to diversify and benefit from India's growth story. Such M&As crossed $2.25 billion in the January-October period.

"There is a greater proportion of inbound M&A deals happening currently. Outbound deals have been constrained by lack of acquisition funding and a refocus by Indian clients to concentrate on recapitalising their balance sheets," said Amrit Singh, head of M&A, Deutsche Equities India. For Deutsche Equities, the proportion of inbound and outbound deal is now roughly balanced, compared to 80 per cent outbound activity in 2007-08.

The spurt in action in India has made many bankers to focus on the domestic front. A case in point is ICICI Bank, which has started chasing inbound deals aggressively. "Till last year, we were predominantly focused on outbound M&As. Now we have broadbased our approach and have begun to advise on deals where global buyers are looking to buy into India," said Kalpesh Kikani, global head (investment banking), ICICI Bank.

He said that over the last three years, more than 80 per cent of ICICI Bank's deals were outbound. "Going forward, this ratio has changed by inbound and domestic activities increasing to 60 per cent of the deal pipeline with outbound deals falling to 40 per cent."

Bharat Banka of Aditya Birla Private Equity feels that this reflects the structural shift happening towards India. While the US and European markets are estimated to have either a flat to marginally positive growth rate, India is expected to grow at seven to eight per cent. "It makes sense for firms to look at growing markets like India. Those who have cash and want to invest will, or rather prefer to invest in India," said Banka.

Agrees Kikani. "There are a number of our clients in Japan and Western Europe who are cash-rich and do not see as many growth opportunities in their home markets. These are the firms who are looking at Indian targets," said Kikani.

"We have increasingly found that clients want to talk to us about India. The flow of interest has accelerated in the last 12 months. The financial crisis is probably a reminder of the fragile Western markets and the growth and sustainability of places such as India," said Nigel Higgins, co-head, global investment banking, NM Rothschild and Sons.

"A lot of MNCs that were in China are now looking at India. Both from a risk management perspective as well as growth. It's not that people were not eyeing India. This was always an opportunity but valuations and the index were high, which made the deals an expensive proposition. But that in many ways has changed," added Ranu Vohra, managing director and CEO, Avendus Capital.

Telecom, financial services, pharma and consumer are some of the sectors that continue to hold interest.