Driven by mobile PC shipments, global computer market is expected to grow 2.8 per cent in 2009, a research firm said on Monday. 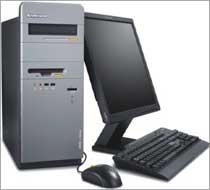 The forecast for shipments is more optimistic than Gartner's final September forecast, which anticipated a two per cent decline for 2009.

"Shipments in the third quarter of 2009 were much stronger than we expected, and that alone virtually guaranteed we would see positive growth this year," Gartner Research director George Shiffler said.

Gartner projects the market value of PC shipments to reach $222.9 billion in 2010.

"Given the market's competitive dynamic, we don't see PC average selling prices rising any time soon. As a result, growth in the market value of shipments will significantly lag shipment growth next year and beyond," Shiffler said.

Gartner analysts reiterated their belief that Windows 7 will have a limited impact on holiday PC sales but noted that 2010 PC shipments could be affected.

"We are expecting a modest bump in fourth-quarter consumer demand as vendors promote new Windows 7-based PCs, but the attraction will be the new PCs, not Windows 7," Shiffler said.