Chennai, Bangalore, Delhi-NCR, Kolkata and Hyderabad saw an uptrend in hiring in October 2009 compared to September while, Mumbai and Pune saw a decline in recruitment, a report said. 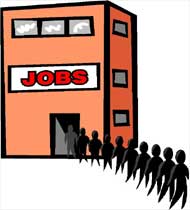 At the national level, job index indicated a decline by 3.9 per cent in the hiring activity in October 2009 as compared to September due to festive season, according to Naukri Jobspeak, the monthly job index released by Naukri.com.

Chennai saw an uptrend in hiring activity by 7.05 per cent, Bangalore by 3.3 per cent, Delhi-NCR by 2 per cent, Kolkata 1.43 per cent and Hyderabad 6.65 per cent. Mumbai and Pune saw a decline in recruitment activity, bringing down the index by 9 per cent and 2.3 per cent respectively.

Recruitment activity in oil and gas bounced back with an increase by 4.8 per cent.

The index has been calculated based on job listings added to the site month on month.