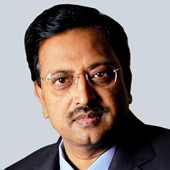 It's one Forbes list where none would want to figure, but Ramalinga Raju, the founder-chairman Satyam Computers (now Mahindra Satyam), has managed the feat of being among the world's 10 most outrageous CEOs.

Raju has been ranked as the world's fourth most outrageous CEO in 2009 on the list compiled by the Forbes, known for its rankings of the richest and the most powerful the world over.

Raju, the only Indian on the list dominated by Americans, owes his place on the list to his disclosure in January about committing the country's biggest ever corporate fraud.

"In January, B Ramalinga Raju, the founder of Satyam Computer Services, confessed to overstating its profits over several years and creating a fictitious cash balance of more than $1 billion.

"He confessed to inventing more than 10,000 fictional employees to help him steal money from the company, and using his mother's name to buy land with the proceeds. The police arrested Raju, his co-founder and brother, B Rama Raju, and former CFO Srinivas Vadlamani on charges of cheating, forgery and breach of trust.

"Despite Raju's confession, he has yet to face charges in court," Forbes said, adding the investigators have now found the fraud to be "much worse than expected after they discovered another $1.25 billion beyond what was already known."

Raju on this list is followed by American businessman Thomas Petters (5th), who went on trial in October for allegedly orchestrating a $3.5-billion fraud.

The magazine said about a year ago Bernard Madoff "raised the bar for corporate malfeasance to an all-time high when he was arrested on charges of orchestrating a $50-billion Ponzi scheme."

"Unsurprisingly, nobody managed to top Madoff's crimes in 2009, but 10 executives showed enough greed, hubris and chutzpah to altogether give him a run for his (stolen) money," it said about the list.

Those on the list include AIG's former CEO Edward M Liddy, who faced a nationwide firestorm when it emerged that $165-million in retention bonuses were being paid to the executives, at the sixth position.

At the seventh position is Danny Pang, founder and the then chief executive of Private Equity Management Group, who was arrested in April on charges of structuring cash transactions so that he wouldn't have to report them to the government.

In April, the SEC of the US accused Pang of running a Ponzi scheme that defrauded his investors of hundreds of millions of dollars. Pang died in September at age 42, before he could stand trial. A report is expected by January to say whether he committed suicide.

Billionaire Allen Stanford, who has been indicted on 21 criminal charges, is ranked eighth; and David Rubin, founder and chief executive of municipal bond brokerage firm CDR Financial Products, is ninth.

At the tenth position is Robert Moran, a UBS private banking client and also the founder and CEO Moran Yacht & Ship, who was sentenced for tax frauds. Moran had pleaded guilty in April to filing a false tax return and admitted to concealing more than $3 million in a secret UBS account.

About the top-ranked Lloyd Blankfein, Forbes said the Goldman Sachs CEO had said earlier this month that he was, as a banker, just doing "god's work."

"Numbers 2 through 9 on this list make it clear that any suggestion that executives at banks and other top financial businesses devote themselves entirely to doing holy deeds is every bit as accurate as it is modest," it added.

The second ranked John Thain had pushed through $3.62 billion in bonuses for his executives in December, as the merger (with Bank of America) was occurring, rather than waiting until January as usual.

"Then in January it emerged that Merrill had lost $21.5 billion in Q4 of 2008. Those rushed bonuses looked too much like Thain pulling a fast one," Forbes said.

About third-ranked Rajaratnam, the magazine said that last month the founder of $3.7-billion hedge fund Galleon Group was charged with securities fraud, but he denies the charges and is out on bail awaiting trial.