Has the sun set on Dubai World? 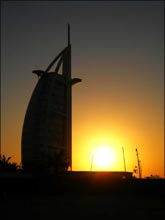 'The Sun Never Sets on Dubai World' -- screams a banner on the web site of the state-owned flagship investment arm of Dubai, even as its inability to pay in time about $60 billion in debts haunted the markets across the world.

"True to our claim -- The Sun Never Sets on Dubai World -- our investment portfolio extends across 100 different cities in the world," said a statement on the web site of Dubai World, which is Dubai's flag bearer in global investments.

No surprise that the markets in almost all the countries witnessed the tremor's yesterday, and again today, when news came out about Dubai's debt burden mounting to such levels that it became difficult to pay back, at least on time.

"Dubai World intends to ask all providers of financing to Dubai World and Nakheel to 'standstill' and extend maturities until at least 30 May 2010," a brief statement from the Dubai government said.

This meant the government asking the banks to let its flagship firms hold back on their liabilities and with the two being state-owned entities, it led to fears that the government itself was in trouble, causing chaos the world over.

The only market that was spared yesterday was the United States, thanks to a holiday on the occasion of Thanksgiving Day.

Dubai World's portfolio comprises some of the world's best known companies and a number of outstanding projects. This includes DP World, one of the largest marine terminal operators in the world and property developer Nakheel and Istithmar World, the group's investment arm that has a global footprint in finance, capital, leisure, aviation and various other business ventures.

Dubai World prides itself in being 'one of the largest holding companies in the world' and says that 'Investors can expect high returns on their investments. Investment risks are also mitigated significantly by a widely-diversified investment portfolio that stretches across many geographies and industries.'

While Dubai World promises that risks would be mitigated for its investors, the only problem was it could not mitigate the risks for itself, at least for the time being, after the global financial crisis led to a sharp erosion in real estate prices and made it difficult for the company to pay back its liabilities in time.