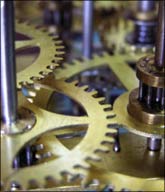 Adding to the festive mood, industrial growth catapulted to a 22-month high of 10.4 per cent in August, clearly showing that stimulus measures have yielded results which may make up for the likely decline in farm output in months to come.

Even though part of the rise is due to low base effect as the index of industrial production  grew by just 1.7 per cent a year ago, the impact of stimulus measures is also evident as there was all-round rise in factory production.

Manufacturing output grew by 10.2 per cent in August, mining by 12.9 per cent and electricity production by 10.6 per cent. Of 17 industry groups, 14 showed positive growth.

On the basis of use-based industrial break-up, consumer durables production grew by 22.3 per cent, basic goods by 10 per cent and intermediate goods by 14.3 per cent.

Industrial growth is expected to post high figures in the months to come due to low base effect of last year, which might make up for the likely loss in farm production.

"We are hoping that when the final figure of second quarter will be available, perhaps there will be some higher growth. If the higher growth projection is there, then in the third quarter, fourth quarter we can make up," finance minister Pranab Mukherjee said.

Even though RBI is expected to maintain a status quo in its monetary policy at its upcoming review on October 27, the double digit industrial growth in August will give it some comfort to tackle inflationary pressures later. Processed food products still showed negative growth of 9.6 per cent in August which shows that food prices may continue to rise.

Soaring industrial growth unleashed buying spree in the stock markets, pushing up the benchmark equity index Sensex to over 300 points.

As industry started contracting from October last fiscal after global financial crisis deepened by the collapse of Lehman Brothers, industrial growth figures would be quite higher in months to come due to low base effect and festive season.

This may enable the economy post a six per cent plus growth, despite likly decline in farm output.

"Before floods, we had put it (agriculutal output down by 2.5 per cent). There is no reason to believe it (IIP) will go down in coming month. It (IIP) is rising due to base effect," Planning Commission member Abhijit Sen said.

Noted economist Govinda Rao expected that industrial growth would be higher in the coming months.

Industrial growth plunges to 3.8% in May