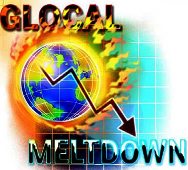 Advocating the need for urgent reform in the global financial structure, India has said 'full and effective' participation of the developing world was crucial to address the financial crisis, but warned against protectionist tendencies.

Noting that the economic crisis had underlined an urgent need for reform in the international financial structure, member of parliament Saifuddin Soz called for a greater role for developing nations in norm-setting and decision-making bodies like the International Monetary Fund.

"We must ensure the full and effective participation of the developing world in the global financial and economic architecture," Soz told a special UN committee that handles economic growth, development and macroeconomic policy areas.

"Much deeper changes are required, including at least an initial seven per cent transfer in quotas at the IMF to developing countries," he added.

The former minister also voiced concern at protectionist tendencies in developed countries to counter the financial turmoil, saying it was short-sighted and would backfire.

"In our efforts to address the crisis, let us not create problems for the future... We must eschew protectionism in any form, be it in movement of goods and persons or in financial services," he said.

Contending that a loss in demand in developed countries had led to a drop in exports of developing countries resulting in unemployment, Soz said expansion in other areas of domestic demand was necessary to stimulate economic growth.

"In this context, India has been advocating increased infrastructure investment in developing countries," he said.

Soz also called for international monetary assistance to implement counter-cyclical measures, since many developing countries cannot execute such measures on their own.

"Official Development Assistance flows are still far below committed levels. . . Moreover, we need to ensure that the ongoing crisis does not lead to a reduction in aid disbursements," he said.

Soz pointed out that the developing countries dependent on commodity exports had been badly hit by the boom and bust cycles, needing assistance to achieve sustainable growth.

"It is imperative that we collectively address the shortcomings of the commodity markets, including eliminating agricultural subsidies by developed countries, and improving regulation on speculative activities," he said.

The senior Congress leader told the special committee that while India had been hit by the financial crisis, its economy had shown resilience and the country hoped to resume robust growth quickly.

"Our targeted interventions, including large stimulus measures, have assisted this process. . . We must now avoid the tendency to prematurely withdraw these stimulus measures under the misguided objective of an 'orderly exit'," he said.