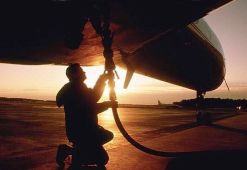 For the third straight fortnight in a row, the state-owned oil firms slashed jet fuel prices by 2.4 per cent on Thursday on strengthening of rupee against dollar.

The aviation turbine fuel or ATF price in Delhi has been cut by Rs 896 per kilolitre (kl) to Rs 36,188 per kl, with effect from Thursday midnight, an official of the Indian Oil Corporation, the nation's largest fuel retailer, said.

The reduced rates will help cash-strapped airlines cut fuel cost, which constitutes roughly 40 per cent of their operational cost.

No comments could be immediately obtained from any of the airlines on the possible impact of the cut on fares.

The three firms had in three installments raised jet fuel price by 7.6 per cent since mid-July.

The rupee has been rising against the dollar in the last few days and it rose to a 13-month high of 46 level on Thursday.

The three oil firms revise jet fuel prices on the first and the 16th day of every month based on the average global oil price in the previous fortnight.