Over 40 million use fake anti-virus software

Have you installed any downloaded anti-virus software on your computer? Check it out, it could be a fake one as cyber security experts have warned that over 40 million users worldwide have been tricked to buy such malicious software. 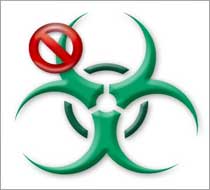 According to security experts at Symantec, web users generally get lured by cyber criminals to download and install fake anti-virus software on to their machines, believing they're protecting their PCs from hackers.

But actually, the criminals, who earn more than 750,000 pounds a year from the business, provide themselves a "back door" access into the machines via the software, The Telegraph reported.

Once the malicious software was installed, it forces users to unwittingly share their credit card and other financial details with fraudsters, said experts at the California-based software firm.

They have identified more than 250 versions of this software, called as 'scareware', and estimate that around 40 million people worldwide have fallen victim to these scams last year.

To intimidate and trick web users in to buying such software, Symantec said, the vendors go to great lengths.

They use pop-up adverts, which look similar as the alert messages from known and reputed anti-virus companies, to lull the users into a false sense of security. Such messages warn users that their computer has been compromised and is at risk unless they immediately install tools to protect it.

"Lots of times, in fact they're a conduit for attackers to take over your machine," said Vincent Weafer, Symantec's vice president for security response.

"They'll take your credit card information, any personal information you've entered there and they've got your machine," he said.

Hackers with always-on remote access to a machine could use that connection to harvest details of bank logins or other security codes, or even pull the computer into a giant 'botnet', a network of compromised machines that send out spam messages, or help to propagate the spread of viruses, unbeknown to the computer user, Weafer said.

"In terms of the number of people who potentially have this in their machines, it's tens of millions," he said.

It is always better to buy those software directly from authorised company shops or from their official websites, they advised.