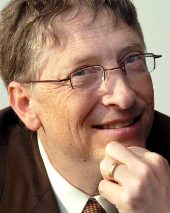 Bill Gates, co-founder of Microsoft, believes chewing gum and chocolate could become the next tool to combat malaria, as he uses his wealth to seek unconventional approaches to world health problems.

As part of its Grand Challenges Exploration programme, The Bill & Melinda Gates Foundation, has granted $100,000 to researchers hoping to use chewing gum to detect malaria indicators in saliva so that blood does not have to be drawn.

The five-year health research grants aims to encourage researchers to pursue bold ideas that could lead to breakthroughs, focusing on ways to prevent and treat infectious diseases such as HIV, malaria, tuberculosis and pneumonia.

Andrew Fung, a University of California doctoral candidate, will use the grant to to develop his idea on the revolutionary malaria test.

Fung admits his idea for an inexpensive and noninvasive new way to detect malaria started out as an intellectual exercise designed to showcase his creativity for a potential postdoctorate employer. He was hoping for a job, not a research grant. He may get both.

Gates also agreed to fund a research by Steven Maranz, from Weill Cornell Medical College in New York, who seeks to look at the effect of chocolate on the malaria parasite.

Chocolate is a promising substance for malaria research because it binds with cholesterol and takes it out of circulation. Maranz wants to kill some of the parasites but leave enough in the blood to help children develop a lifetime resistance to malaria.

The scientist points out that although he feels confident of his idea, it's still an unproven hypothesis.

"This is an exploration grant. Nothing is proven at this point," said Maranz, speaking for himself and all the other scientists receiving Grand Challenges grants.

The Foundation gave grants of $100,000 to each of 76 unconventional approaches to global health research.

Tuesday's announcement, the third round of such grants, saw nearly 3,000 proposals being submitted.

Dr Tachi Yamada, president of the Gates Foundation's Global Health Programme, said the foundation hopes this grant programme will someday produce a breakthrough idea that could save untold numbers of lives.