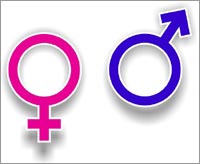 India has been ranked in the bottom half among 134 countries in terms of gender equality, in WEF's latest ranking that assessed the distribution of resources and opportunities among males and females.

Slipping one place from last year, India has cornered the 114th position in the World Economic Forum's 'The Global Gender Gap Index 2009 rankings' which is topped by Iceland.

Apart from Iceland, the list features three more Nordic nations at the top -- Finland (2), Norway (3) and Sweden (4) -- while New Zealand is at the fifth spot.

Though placed way ahead of India, neighbouring China has dropped to the 60th position. The country had cornered the 57th spot last year.

"While India, Iran and Pakistan perform very poorly on the economic, education and health subindexes, their overall scores are partially bolstered by relatively good performances on political empowerment," the WEF said.

The United Kingdom is ranked 15th, while the United States is in the 31st spot.

Among other BRIC nations, Brazil is at the 82nd spot while Russia is ranked 51st.

South Africa and Lesotho made great strides in closing their gender gaps to enter the top 10, at 6th and 10th position, respectively.

Gains for women in parliament and women ministers in the new government also helped close the gender gap in the country.

The Philippines (9) lost ground for the first time in four years but remains the leading Asian country in the rankings.

Botswana (39) made the second biggest improvement of 26 places thanks to a major increase in labour force participation according to the latest data from the UNDP, plus greater wage equality for women.

Japan's (75) ranking improved by 25 places relative to last year largely due to increases in the proportion of women in professional and technical positions as well as legislators, senior officials and managers.

The United States (31) fell by three places, owing to minor drops in the participation of women in the economy and improvements in the scores of previously lower-ranking countries.

Germany (12) and the United Kingdom (15) again slipped down the Index this year. Switzerland (13) advanced for a second consecutive year as a result of greater female participation in the economy. Italy (72) continues to hold one of the lowest positions among European countries and dropped three spots relative to 2008 due to persistently poor scores in economic participation.

This was driven mainly by small improvements in the economic participation of women. Iran (128), Turkey (129), Pakistan (132) and Yemen (134), already at the bottom of the rankings, displayed an absolute decline relative to their performance in 2008.

The Republic of Korea and Mongolia were among the top countries to narrow wage gaps, while in Austria and Belgium income disparities widened the most.

Women entering senior official, managerial and legislator roles shot up most in Japan and Uganda, while Croatia and Costa Rica saw these gaps widen markedly.

4. Health and survival: Outcomes on life expectancy and sex ratio

The Index's scores can be interpreted as the percentage of the gap that has been closed between women and men.

"Girls and women make up one half of the world's population and without their engagement, empowerment and contribution, we cannot hope to achieve a rapid economic recovery nor effectively tackle global challenges such as climate change, food security and conflict," said Klaus Schwab, founder and executive chairman, World Economic Forum.

"The Forum works year-round with leaders on ways to close gender gaps through its Women Leaders and Gender Parity Programme, and this report underpins their work."

The Global Gender Parity Group, a community of highly influential leaders from business, politics, academia, media and civil society -- 50% women and 50% men -- seeks to share best practices and identify strategies to optimize the use of talent.

"Out of the 115 countries covered in the report since 2006, more than two-thirds have posted gains in overall index scores, indicating that the world in general has made progress towards equality between men and women, although there are countries that continue to lose ground. We have included a section on the dynamics of the gender gap and found that progress is achieved when countries find ways to make marriage and motherhood compatible with the economic participation of women," said co-author Ricardo Hausmann, director of the Centre for International Development at Harvard University, USA.

"The Global Gender Gap Report demonstrates that closing the gender gap in all aspects of life provides a foundation for a prosperous and competitive society. Leaders should act in accordance with this finding as they rebuild their battered economies and set them on course for sustainable long-run growth," said co-author Laura Tyson, Professor of Business Administration and Economics, University of California, Berkeley, USA.

"Countries that do not fully capitalize on one-half of their human resources run the risk of undermining their competitive potential. We hope to highlight the economic incentive behind empowering women, in addition to promoting equality as a basic human right," said co-author Saadia Zahidi, Head of the Forum's Women Leaders and Gender Parity Programme. Watch the interview.

The Forum continues to expand geographic coverage in the report. Featuring a total of 134 countries, this year's report provides insight into the gaps between women and men in over 93% of the world's population. Thirteen out of the 14 variables used to create the Index are from publicly available hard data indicators from international organizations, such as the International Labour Organization, the United Nations Development Programme and the World Health Organization.