News
Business
Movies
Sports
Cricket
Get Ahead
Money Tips
Shopping
Sign in  |  Create a Rediffmail account
Rediff.com  » Business » India to aim for 9-10% growth for the next 10 years: PM 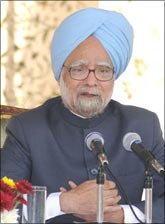 Prime Minister Manmohan Singh said on Friday the country should aim at a sustained economic growth of 9-10 per cent over the next decade as he pushed for more reforms and increased investment in sectors like infrastructure and agriculture.

Making it clear that development of rural areas and uplift of social classes would be crucial to building the 'India of tomorrow', he said his government had taken a series of initiatives aimed at investing in rural and urban infrastructure, generating maximum employment and improving productivity of farm economy.

To a question about reforms, particularly in labour, insurance and financial sector, being stalled, he said, "We need to push forward the reforms process in the areas you mentioned and we will do so."

"2020 is not far away. Our primary challenge in the next decade will be to sustain high rates of economic growth, to ensure that the growth process remans equitable, to invest in the education and health of every child and adult, to generate gainful employment," he said addressing the Hindustan Times Leadership Summit in New Delhi.

Among the challenges he listed were the building of modern, efficient and environment-friendly infrastructure and ensuring that government and public services are efficient and responsive to people's needs and function transparently.

"We should aim to sustain growth rates of 9 to 10 per cent per annum," he repeated.   Singh pitched for increased investments in physical and social infrastructure, paying particular attention in the needs of agriculture and the rural areas.

"The fact that our savings rate is 35 per cent suggests that this is a realisable goal," the prime minister said, adding that the challenge for the political leadership at the national and state levels will be to ensure this outcome.

Underlining that the states will have to shoulder the responsibility of the Centre in development, he said, "For each of the initiatives (of the Centre) to be successfully implemented, we need pro-active and creative leadership at the state and district levels."

He said the real change in India would come when 'we get the right kind of state and local leadership -- a forward-looking, modern and compassionate leadership that strengthens the foundations of our Republic. The focus of the debate on leadership for building a new India should, therefore, shift to the states."

The prime minister said the challenges in nation building were primarily at home, rather than outside, and these are best addressed by ensuring sustained and inclusive growth and development.

"We do face external and global challenges, but they are nowhere as daunting as the ones we face at home. If we get our house in order, if we can liberate each and every citizen of this free nation from the tyranny of poverty, ignorance and disease, there is no external challenge that we cannot overcome," Singh said.

Pointing out that the less developed regions of the country are the more populated ones, Singh said this has contributed to persistence of poverty and to the problem of internal migration.

"In these states, we need a forward-looking, development-oriented political leadership. We need a committed and pro-active civil service. We need an active civil society. We need a professional middle class. We need a combination of all these participants to transform our less developed regions and take them forward," Singh said.