Recession cuts down divorce cases in US 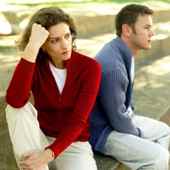 Couples often get separated because of financial woes, but the current economic slowdown appears to be downsizing the rate of divorce cases, along with jobs and salaries, according to a new survey.

The American Academy of Matrimonial Lawyers, a leading US organisation of family lawyers, which surveyed its 1,600 members has found that 57 per cent of the attorneys have noted fewer divorce filings since the last quarter of 2008.

"The current economic climate is proving to be far more unforgiving than estranged couples seeking a divorce," said Gary Nickelson, president of the AAML, was quoted as saying by the Earth Times.

"Forced to weigh damaged marriages against tight budgets and uncertain financial outlooks, many spouses seem more willing to try and wait out the recessionary storm."

Only 14 per cent of AAML members reported an increase in the number of divorce filings during these difficult times in the US, according to the survey. Founded in 1962, the AAML is working toward advancing the cause of matrimonial law, in order to better protect the welfare of American families.

Source: PTI© Copyright 2021 PTI. All rights reserved. Republication or redistribution of PTI content, including by framing or similar means, is expressly prohibited without the prior written consent.
Related News: American Academy of Matrimonial Lawyers, US, Gary Nickelson, Earth Times
Print this article