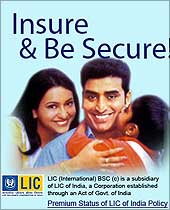 Such a large investment by the country's biggest domestic financial institution will boost the sentiments at bourses, which witnessed volatility, especially after the collapse of Lehman Brothers in America last year.

Having crossed the 21,000 points mark in January 2008, the Bombay Stock Exchange benchmark index (Sensex) nosedived to around 8,000 points last year itself.

The Sensex on Thursday closed at 15,398 points.

Imran Shehzad, who wanted to blow up the BSE