Air India's lucrative $8.9 billion insurance cover contract has kicked off a battle between private insurance companies and a public sector consortium led by The New India Assurance Company Ltd, with the latter writing to the airline to complain that tender contract norms have not been adhered to and were relaxed to the disadvantage of two bidders. 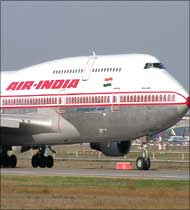 New India had the cover contract for 2008-09. In its communication to the chief vigilance officer of A-I, it has alleged that Reliance General Insurance (part of the Anil Ambani group) has misled facts and the certification provided by them should be verified before the final contract is given.

The letter also says the company has registered its strong protest after A-I decided to open all the bids, saying this was a material breach of the letter and spirit of the tender.

A-I has denied any breach of procedure and says it has asked Reliance to respond to the allegation of New India.

After an aborted attempt in April, A-I had issued new tenders in June, asking for technical bids from insurance companies to participate in the aviation insurance renewal contract for 2009-10, as the existing one was ending on September 30.

The company called New India, Reliance and ICICI Lombard - which were technically qualified - on August 27 to open the bid documents.

The public sector consortium, led by New India Assurance, was close, with a bid of $24.9 million.

A Reliance General Insurance spokesperson, when asked about the issues raised, said, "We have submitted all requisite documents and information in compliance with the tender and as desired by Nacil (National Aviation Co, which runs A-I), including with respect to our reinsurers. The tender committee is evaluating all bids, and is yet to arrive at a final decision."

"We have sought clarifications from Air India as some conditions were not met. The securities placed by Reliance on the lead underwriter - Japanese company Mitsui Sumitomo - does not fit in the criteria.

The credibility of the lead reinsurer is very important because it furnishes the involvement of another 10-15 underwriters," said a senior executive of an insurance company which had bid for the contract.

Under the tender conditions, the underwriter should have handled an account similar in size to A-I's in the airlines business.

In its letter to A-I, New India notes that Reliance had said Mitsui Sumitomo was lead underwriter to All Nippon Airways, which is similar in size to Nacil. However, All Nippon's lead underwriter for the past 40 years is actually London-based Global Aerospace, says New India.

Its letter has an e-mail apparently confirming this from the CEO of Global. Mitsui Sumitomo has only a 9.28 per cent stake in Global Aerospace, it says.

Despite several attempts, I S Phukela, the general manager of New India Assurance, could not be reached for comment over the phone.

Said Jitender Bhargava, A-I's executive director, corporate communications: It is very natural that a company that fails to bag a contract or is likely to lose out can raise issues. It happens in PSUs all the time because the course of vigilance is available. We would like to reaffirm that Air India went by the certificates given by the insurance companies, which was what was prescribed under the RFP on the underwriter's status. It is the insurance company (who are the bidders) which has to satisfy the norms by providing us with a written certificate that the underwriter has in the past led a size of Air India, has been rated 'A' by a established credit rating agency and was prepared to take a 10 per cent line in the exposure, which was done.

The Committee, therefore, opened the financial bids. Since New India have raised certain issues on the lead underwriter of Reliance (Mitsi Sumitomo), we have asked Reliance to clarify the same.

"Air India has not relaxed any tender conditions in doing so," he added. "Air India will ensure that all norms prescribed in the RFP are followed and the contract is awarded in a transparent manner and that is why the objections raised by a bidder have been taken note."

Others involved in the deal say the battle has become bitter because the contract could end the near-monopoly of state insurance companies on AI's business.

An industry source said Reliance was originally part of an ICICI Lombard consortium, with Independent being the reinsurance broker. On May 29, a few days before the price bids were to be given (June 3 was the scheduled date), Nacil decided to postpone the process. And then the Air France crash happened, pushing up reinsurance rates.

Then came the second tender and Reliance decided to part ways and set up its own consortium, with Marsh as the reinsurance broker.

The New India consortium was being advised by Aeon, which had bagged the Air India insurance contract for the past seven years (before that GIC was the insurer).

Insurance experts say a delay in awarding the contract is exposing Nacil to the prospect of higher premium, as rates are hardening, with the airline having to deal with incidents such as the fire on the Mumbai-Riyadh flight on Friday. Global reinsurance rates have already hardened following the recent air crashes.