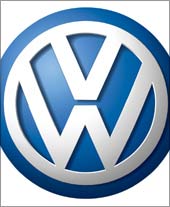 Europe's largest car maker Volkswagen is planning to more than double its India headcount with addition of 1,500 employees at its Chakan plant alone in Maharashtra.

The group, which started production at Chakan near Pune in March 2008, is looking at full-capacity production at this plant by 2012 and would need to strengthen its staff strength for the same, its India head said.

Volkswagen has two facilities in India at Aurangabad and Chakan, which assembles cars of its three brands -- Skoda, Audi and Volkswagen.

"We opened our Chakan facility this year and it is producing Skoda Fabia now, but in small numbers. When we will launch the small car Polo next year, the numbers will increase," Volkswagen Group India president and managing director Joerg Mueller told PTI.

The company is now undertaking pre-production testing of Polo at the Rs 3,800-crore Chakan plant, which has an annual capacity of 110,000 units.

"Currently we have about 1,000 people employed with the group. We will require about 2,500 employees once the plant will start production at full capacity in the next 2-3 years," Mueller said.

The company would increase its headcount to 1,200 by the end of this year, he added.

Mueller also said the group is eyeing 8-10 per cent stake in the Indian passenger car market in the next 5-6 years from a minuscule share now and would consider to integrate after-sales service of its three brands in India for better synergy.

The group sold about 19,000 units last year in the over 1.5 million-unit Indian passenger vehicle market of Skoda, Audi and Volkswagen brands.

"We are also looking for synergies within our brand in logistics and after-sales services. It is possible to integrate the back-office and it is important for the brand also," he said.

The company has announced that it would launch its small car Polo early next year in both petrol and diesel variant.

"Polo will enjoy the excise benefit given in the country to small cars... otherwise it cannot be a competitive model here," Mueller said.

Currently small cars with less than 4 metres in length and displacements up to 1200cc for petrol and 1500cc for diesel engines attract 8 per cent excise duty in India.

On its concept car UP!, Mueller said the company is currently developing the model for the European market where it would be launched by 2011.

"It (Up!) is a car for big metros and it can be a very interesting car in India as well. But we have not finalised to launch it here," he added.