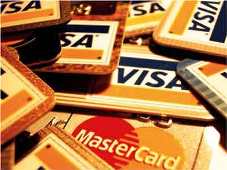 Relieved at repaying your credit card dues? Hold on, for you still might still get a mail or a letter from the bank in the next few days saying that your credit limit has been slashed.

Anyone would assume that paying credit card dues increases credit worthiness, besides reducing the interest burden. But banks think otherwise.

Experts said there could be many reasons for this. For one, the bank might be in the process of reducing its overall exposure to credit cards. Two, if a customer has been rolling over a significant part of his outstanding for a couple of quarters, the bank may be unwilling to allow him to build up another large outstanding. Three, holding multiple cards may lead to such a situation.

Some experts say that if there is a perception that the industry you are working for is likely to suffer in this meltdown, banks may want to reduce their exposure to you on a war-footing, something employees in financial, automobile and business process outsourcing sectors discovered last year.

"A credit card portfolio is analysed based on various socio-demographic criteria such as geography, location, job, whether the customer is self-employed or salaried, and so on. Based on such analyses, certain actions are initiated to mitigate risk," said a Deutsche bank official.

Let's look at a few things that banks view as risky

Constant Rotation: If the customer rotates his outstanding regularly and pays a small amount, banks will consider him incapable of servicing the loan. Subrat Pani, business head of cards at Kotak Mahindra Bank, said customers should pay back the rollover amount over three-six months.

Inactive Cards: "An inactive card is one big reason," said the Deutsche Bank official. This is because it affects the industry's profitability. Companies create infrastructure for servicing each card and it is critical that the cards are used.

Credit Limit Usage: If a customer uses its credit limit partially over a long time, banks may take a decision to reduce it. "As per Basel-II norms, banks are expected to provide for capital on the basis of the overall limits and hence management of credit limits is an important tool for banks to manage capital requirements," said RL Prasad, general manager and head of cards at Standard Chartered Bank. Limits are also withdrawn on low credit-line use to protect the liability of customers in case of a fraud. "If a card is misused due to a customer's negligence, he is liable to pay the entire amount," said a banker.

Multiple cards: A customer can be considered risky if he holds multiple cards as banks view him as overleveraged, especially if he is actively using all the cards.

Employment Status: Card issuers put a lot of emphasis on this. They believe a self-employed person has more chances of defaulting than a salaried one. Within salaried too, customers working with large organisations are given more leeway than those employed with small companies. "The discrimination is done as it is generally assumed that customers with large corporations have more stable income," said a banker.

Patterns of usage: This is the second-critical factor after inactive cards. Customers who use their cards for working capital needs or business payments can be perceived to be high-risk.

Bankers said the credit card business was becoming analysis driven. They regularly review their portfolio to improve its quality. Whenever they feel that a customer can feel a financial strain, they take measures to de-risk themselves.

For this purpose, banks also constantly monitor their own portfolio and look at things such as the repayment record; the activity on the card; patterns of usage; how often the customer rotates the outstanding; what percentage of outstanding is paid every month, and so on.

They also use the credit information bureau regularly, at least once in three months, to see the overall financial stability of the customer.