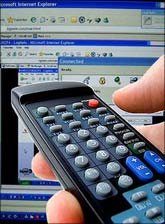 Cable operators beware. For the first time in the 17 years since the launch of cable television in the country, broadcasters will be able to track whether their channels (free or paid) are being shown by cable operators, regardless of their location.

The ccTrack device can be installed in the catchment area of a cable network (in any cable home with permission of the consumer).

The device then culls data, as often as five times a day, in the form of images for all the frequencies (on which cable channels are transmitted) and the captured images are transferred online to the server through the general packet radio service (GPRS) connectivity thereby enabling the broadcasters real-time information on whether their channels are being shown by a cable operator servicing a particular locality.

Broadcasters are undoubtedly delighted. "Availability of channels across key towns and locations helps us get higher ratings. And ratings determine the advertising revenue of any channel. Therefore if we can track the connectivity and carriage of our channels across the country, it will be of immense help," says a senior executive working for a leading media house. He requested anonymity.

For instance, if prior to an ODI cricket match a cable operator replaces an entertainment channel or a news channel from the prime band to accommodate a sports channel, the "ccTrack" will be able to detect it and inform the broadcaster whose channels have been dropped in favour of a sports channel even though the operator had taken money to transmit the same.

"The ccTrack has greater utility for even the public service broadcaster Doordarshan as it is mandatory for cable operators to carry DD National and DD News on the prime band. ccTrack can easily track and enforce the carrying of DD channels by any authorised cable operator in the country," says Amit Varma, CEO, aMap.

He claims, "we have already got orders from broadcasters requesting use of  ccTrack to monitor the connectivity of their channels across certain states and towns."

Varma hopes to do the same for the government too. "We made a presentation to the Ministry of Information & Broadcasting and got a favourable response," he says.

The ccTrack can help private broadcasters, too, since they pay over Rs 1,200 crore annually as carriage fees to over 5,000 cable operators in the country to carry their 'important' channels on the prime band -- a frequency band that is easily tuned in by any TV set and can carry 20-30 channels.

There are currently over 480 channels available in the country while the analogue cable distribution system reaching over 80 million homes can carry not more than 60-70 channels at any given time.

With the proliferation of broadcasters and channels across the country amidst limited bandwidth availability, connectivity on the right band is of paramount importance for any channel not only in the launch phase but on a continuous basis.