Indians among most corrupt while doing business abroad 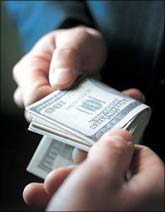 At least 30 per cent of 2,742 business executives surveyed across the world regard Indians among the most corrupt when doing business abroad to 'speed things up', according to a report by an NGO Transparency International India.

The 'Global Corruption Report 2009: Corruption and the Private Sector' claims that Indian and Chinese companies play an active role in global business but engage in 'bribery' when doing business abroad.

The Competition Act enacted in 2002, which promotes and sustains competition in markets and protects the interest of consumers, has remained a non-starter in India, the report says.

"A minimum of 100 senior executives each in 26 countries were questioned regarding the practices used by business persons from various nations," it says.

"TII has had some measure of success with public sector firms with the use of Integrity Pact, a tool to check corruption in procurement and tendering. We have not been able to generate similar interest among the private sector yet," says TII chairman RH Tahiliani in a statement.

Another concern the report addresses is how the sheer economic power of some firms and business sectors translates into disproportionate and undue leverage on political-decision making.

"Companies have no clear cut guideline on regulating and making transparent political contributions. Corporates report high-level strategic commitments to anti-corruption but they do not always report on the necessary support systems required to meet these commitments," says Anupama Jha, executive director of TII.

The report also points out that half of international business executives polled estimated that corruption raised project costs by at least 10 per cent.

"Ultimately it is citizens who pay: consumers around the world were overcharged around $300 billion through almost 300 private international cartels discovered from 1990 to 2005," she adds.

Who is responsible for anti-India campaign in US?