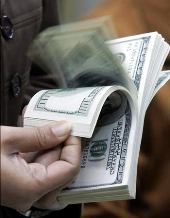 It seems chief executive officers have failed to take up austerity measures in a big way amid the global financial crisis, as a study says that their salaries declined marginally in 2008.

Exorbitant executive pay packets have come under fire from different quarters internationally, with many even blaming the practice for the ongoing financial turmoil.

According to a report from The Corporate Library, an executive compensation research firm, median total annual CEO compensation for the companies included in the study declined by just 0.08 per cent in 2008.

The report, which includes data from more than 2,700 companies, suggests that the link between CEO pay and firm performance remains very weak.

"While these findings are historic, as we have never seen a decline in CEO compensation since we began this series of surveys in 2002, if there were ever an argument that pay is fatally divorced from performance then this is surely it," senior research associate Paul Hodgson, co-author of the report said.

The survey revealed about 75 per cent of CEOs included in the study received base salary increases in 2008, up from 73 per cent in 2007.

Besides, another report by The Chronicle of Philanthropy stated that the median compensation for chief executives at the US's biggest non-profit organisations climbed seven per cent to $3,61,538.

It also found that two-thirds of non-profit firms maintained or increased salaries for their top executives.

According to the report published in CNNMoney.com, non-profit CEOs did not feel the economic pinch in 2008, despite charitable givings having declined for the first time since 1987.

Moreover, the Bill & Melinda Gates Foundation decided to institute a salary for its CEO for the very first time last year, when Jeffery S Raikes came on as the chief executive.