News
Business
Movies
Sports
Cricket
Get Ahead
Money Tips
Shopping
Sign in  |  Create a Rediffmail account
Rediff.com  » Business » What is dual listing; why India may not adopt it

What is dual listing; why India may not adopt it 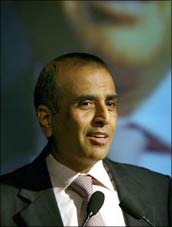 However, if there is one important issue that should be fixed if this alliance is to happen, it is the issue of dual listing.

Currently, dual listing is not allowed in India. Yet, the Indian government could mull over it but there are just too many laws to be amended to adopt dual listing and this could take many years.

But what is dual listing all about? Why is India hesitant to adopt it? And what should be done? How does this issue stand between the Bharti and MTN deal? Let's find out.

What is dual listing?

Put simply, dual listing is a process by which a company would be allowed to be listed and traded on the stock exchanges of two countries.

Dual listing system precludes the need for a merger. In the case of two companies operating in two different countries entering into an equity alliance, the dual listing system would allow these companies to retain their separate legal identities and continue to be listed and traded on the stock exchanges of the two countries.

In a way, this is done to protect the national identities of the two companies. From the shareholders' perspective they can buy and sell shares of both the companies on the stock exchanges in the two countries.

In the Bharti-MTN deal case, allowing dual listing of the companies could see them existing as separate entities under a common management. However, this will require permission from the government to have similar compositions on the boards of the companies in both the countries.

Is dual listing the same as ADRs/GDRs?

Before we see if dual listing is the same as ADRs/GDRs let us briefly see what are ADRs and GDRs.

ADR is the acronym for American Depositary Receipt. This was introduced in the United States way back in 1927 to simplify the complications in buying and trading of shares in foreign countries, largely because of different prices and currency values.

To solve this problem, a US bank or brokerage buys a lot of shares from the company, groups them into different bundles and reissues them on the US stock exchanges like regular stocks.

Investors buying ADRs can covert them into shares. However, it can be issued only within a country and traded only on domestic bourses. These ADRs are almost the same as shares except one thing, ADRs don't let you vote.

GDR is the acronym for Global Depository Receipt and is very similar to the ADR. Here, a foreign branch of an international bank holds the domestic shares and sells them through its branches across the world. The buyer is issued a certificate called GDR.

Currently, India permits the listing of DRs (depository receipts) of companies in foreign countries. For instance, banks/brokerages in a foreign country called custodians can buy the shares of Indian companies, and list them on their stock exchanges after converting them to GDRs/ADRs.

How common is dual listing?

Given the complexities involved in it, dual listing doesn't enjoy widespread global support. However, it doesn't mean that dual listing system doesn't work. There have been instances in the past to show that it works quite efficiently.

Is dual listing permissible in India?

No, dual listing of Indian companies under existing rules is not permissible. And this could prove to be a major roadblock for the Bharti-MTN deal. As of now, the proposed merger between Bharti Airtel and MTN does not require dual listing.

However, if this happens, Bharti Airtel, which is listed only in Indian stock exchanges could get listed on the stock exchange in Johannesburg and vice versa. This dual listing will help MTN retain its South African identity.

What should India do to adopt dual listing of companies?

If India were to consider allowing dual listing then it will require major amendments to some of the important existing corporate laws in the country: for instance, the existing Companies Act and the subsequent revisions to it.

The Foreign Exchange Management Act (FEMA) would also need an amendment. Besides, the Reserve Bank of India's permission is required for domestic trading in shares denominated in foreign currency.

A common currency, say the US dollar, could also be required to permit trading of shares.

Another important bottleneck that the government of India should consider is removing the cap on capital account convertibility.

Only if this is done Indian rupee will be made fully convertible, thus enabling investors to buy shares of a dual listed company in one country and sell it in an overseas market.