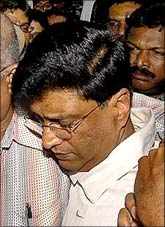 The opinion of director (discipline) was considered and has been approved by ICAI's disciplinary committee, Agarwal said.

Hyderabad-based Satyam Computer plunged into a crisis after its founder-Chairman B Ramalinga Raju admitted to fudging account books of his company to the tune of nearly 7,800 crore.

Agarwal said Srinivas failed to carry out the statutory duties as Satyam's CFO, while Gupta failed in carrying out the internal audit of accounts of the firm.

Prasad and Ravindranath were part of the audit team for Satyam Computer, while Gopalakrishnan and Talluri signed the balance sheet, he said.

The disciplinary committee will now issue notices to all those found guilty for their written statements which are to be submitted within 30 days," Agarwal said.

If any person found prima facie guilty does not submit statements within the stipulated period, ICAI would further the process of personal hearing by issuing notices, he said.

Image: Satyam CFO Vadlamani Srinivas (R) being brought to the Chanchalguda prison after his arrest in Hyderabad in January 2009. Photograph: Krishnendu Halder/Reuters

Source: PTI© Copyright 2022 PTI. All rights reserved. Republication or redistribution of PTI content, including by framing or similar means, is expressly prohibited without the prior written consent.
Related News: Institute of Chartered Accountants of India, Satyam, Agarwal, CFO, Price Waterhouse
Print this article