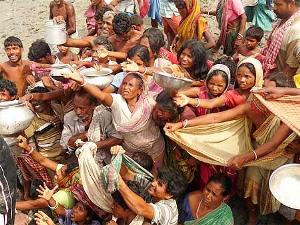 Poor people and rural women from developing nations in Asia will be among those most affected by climate change which poses fundamental threats to the region's food and energy security, according to studies funded by the Asian Development Bank.

The climate change is also expected to lead to increased migration of people within national boundaries, mainly into mega cities.

Attributing to three studies on agriculture, energy and migration, the ADB said on Wednesday the impacts of rising temperatures in Asia would fall disproportionately on the region's poor, and rural women from developing countries would be among the most affected groups.

Such a scenario would arise on account of these groups dependence on subsistence crops, their limited access to resources, and their lack of decision-making power.

"The food and energy security of every Asian is threatened by climate change, but it's the poor -- and especially poor women -- who are most vulnerable and most likely to migrate as a consequence," ADB vice-president Ursula Schaefer Preuss said.

Over half of Asia's total population lives below the $2 per day poverty line and these people are more depend on rain-fed agriculture and live in settlements that are highly exposed to climate variability and change.

Noting that about 2.2 billion Asians rely on agriculture for their livelihoods, the statement said the sector is now threatened by falling crop yields caused by floods, droughts, erratic rainfall and other climate change impacts.

Another study found that climate change-induced threats to Asia's agriculture and energy would contribute significantly to migration within national boundaries.

As per the energy report, Asia's access to affordable energy is facing rising threat due to demand-supply gaps, high reliance on traditional biomass fuels, and the high-energy intensity of the region's economies, among others.

The statement noted that the region's vast renewable energy potential could help in responding to this scenario, provided 'policy and finance measures quickly scale-up proven technologies for the poor, including small hydro and solar power'.

The agriculture, energy and migration studies were produced by the International Food Policy Research Institute; USA; The Energy and Resources Institute, India; and the University of Adelaide, Australia, respectively.