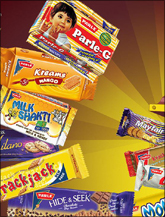 Biscuit-maker Parle Products aims to sensitise 80 lakh (8 million) people across India on reducing wastage of plastic through a plantation drive to go green, which begins next month.

Parle will launch a campaign called 'My Green Planet' encompassing 5,000 schools in more than 70 cities and towns. "We will go to 5,000 schools across India and sensitise 40 lakh (4 million) children. Parent participation will mean a total of 80 lakh individuals sensitised," Parle Products group product manager Mayank Shah told reporters in Mumbai on Wednesday.

The snack-maker will kick-start the 15-day programme in the first week of October which will end on October 20.

The School Giving Programme -- a plantation drive to go green -- will focus on collection of wrappers off the streets across the identified cities and towns.

"We have tied-up with some agencies to dispose off the wrappers in an appropriate way. We also have in-house facilities to dispose them off in an eco-friendly manner," Shah said.

Parle has instituted certain awards that will be given out at the end of the exercise for the school that collects the maximum wrappers.