Singh brothers quit Religare board to focus on healthcare biz 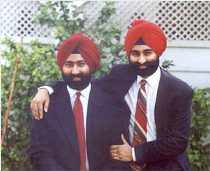 Religare Enterprises on Tuesday said that its top-level management was revamped with a new chairman and chief executive after its promoters -- Malvinder Mohan Singh and his younger brother Shivinder Mohan Singh -- voluntarily exited the board to devote more time to their healthcare business.

Malvinder has relinquished his position as chairman of the firm, while Shivinder has quit as director. It has appointed Sunil Godhwani as chairman and managing director, while Sachindra Nath will be the new chief executive officer of the financial services firm.

Speaking to reporters while making the announcement, Malvinder said the step was taken with view to segregate the management from ownership and thereby create value for shareholders. "Shivinder and I will continue to focus on building a global healthcare delivery business," he said.

Asked if their exit from board indicate their plan to sell off the financial services firm, Malvinder said, "nothing like that. . .  in fact, we are willing to increase our stake in Religare Enterprises."

He also announced the induction of Religare chief operating officer Shachindra Nath and chief financial officer Anil Saxena on the board. Three more new members with global experience in asset management, investment and commercial banking would be inducted later, he added.

As per the arrangement announced on Tuesday, Malvinder said he will focus on global healthcare opportunities and will associate more closely with the recently-acquired Parkway Holdings in his capacity as its chairman. "My own focus will be driven on the international aspect of the healthcare side and for Fortis, we would use Parkway as a vehicle for international growth," he said.

On the other hand, Shivinder, who is the managing director of Fortis, will focus on the board to make Fortis Healthcare a world-class institute.

Last month, Fortis had acquired 23.9 per cent stake in the Singapore-based healthcare firm Parkway for $685 million as part of its efforts to expand its operations in Asia and the Middle East. The deal is the largest acquisition made by an Indian healthcare services firm so far.

When queried whether the company is interested in buying a stake in the domestic low-cost carrier SpiceJet, the Singh brothers declined to comment.