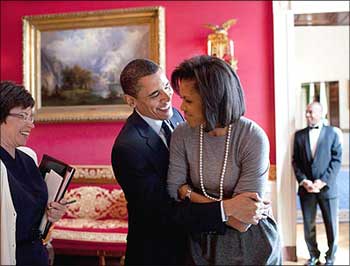 The credit crunch did not really touch the Obamas, as the US President and wife Michelle earned $5.5 million in 2009, which is more than twice their income in 2008.

The White House released Barack Obama's tax return on Thursday -- the day all Americans have to file their tax returns.

And it showed that the Obamas earned $5.5 million last year and paid nearly $1.8 million in federal income tax, reports The Telegraph.

The White House said that the increase was due to increased sales of Obama's books.

Obama's books Dreams From My Father and The Audacity of Hope were on sale in 2008, but after he became the President sales have skyrocketed.

Obama, whose 'principal business or profession' was listed in his tax return as 'author', and the First Lady gave $329,000 to charities. That included $50,000 each to CARE and the United Negro College Fund.