RTE funding pattern should be decided by council: Par panel 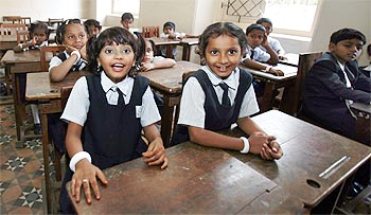 The funding pattern between the Centre and the state for implementing Right To Education Act should be referred to the National Development Council headed by the prime minister, a parliamentary panel has suggested.

The parliamentary committee on HRD in its 221st report has said the states will not be able to meet their share for Right To Education Act.

The implementation of Sarva Siksha Abhiyan, an on-going scheme that aims at universalisation of elementary education, has been affected due to the inability of states to provide the required funds for the scheme, it said.

"Their (states') financial constraints with regard to SSA could increase manifold in view of requirement of enormous funds for implementation of the Right To Education Act," the committee, headed by Oscar Fernandes, said in its report.

The committee said that the implementation of RTE will require Rs 1.71 lakh crore (Rs 1.71 trillion) for a period of five years.

"The committee desires that the issue of funding may be considered in the light of the states inability to bear the huge financial burden and the matter be referred to the National Development Council," the report said.

The issue must be considered during the forthcoming meeting of NDC, a body headed by Prime Minister Manmohan Singh and having chief ministers as its members, the panel suggested.

Several states have asked for revision of SSA funding pattern which is in the ratio of 55 to 45 between the Centre and the states at present.

The human resource development ministry has told the committee that change of funding pattern for combined SSA-RTE requirements has been taken up with Planning Commission and finance ministry.

The RTE Act came to force from April 1.

Several states, including Uttar Pradesh and Bihar, have expressed their inability to fund for implementation of the Act.

The committee also felt that the non-availability of teachers is a major challenge for implementation of RTE.

It suggested undertaking recruitment of teachers on a mission mode to meet the shortfall of 5,10,000 teachers.

As the government has started implementing a new Rashtriya Madhyamik Siksha Abhiyan scheme in secondary education with a funding patter of 50-50 in the 12th Plan, the committee expressed apprehensions over its implementation.

It said the ministry should look into the issue of funding earnestly and work out a mutually acceptable formula.

The committee was critical about the poor utilisation of funds under the flagship schemes like SSA and mid-day meal.

It expressed concern over the high drop out rate of children at primary and secondary levels.

By Class V, every third child drops out and by Class VIII, every second child leaves the school, the committee found. The committee also expressed concern over quality of education in schools.

Delhi govt, schools yet to decide on RTE