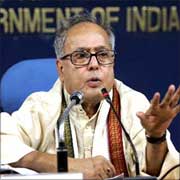 The government announced a slew of concessions worth up to Rs 400 crore (Rs 4 billion) for coffee growers, local tobacco industry, hospitals, cancer drugs and urban housing for poor, among others, as part of the Finance Bill that was passed on Thursday.

In a relief to realty sector and home buyers, Mukherjee announced tax concessions to the construction sector, which was brought under the ambit of service tax in this year's Budget.

With Thursday's announcement, service tax would be levied on 25 per cent of the gross sale value of property compared to 33 per cent proposed in the budget in February this year.

"I propose to provide the tax relief to this (construction) sector by enhancing their rate of abatement from 67 per cent to 75 per cent of the gross value, where such value includes the value of the land constructed upon," Mukherjee said replying to the debate on Finance Bill in Lok Sabha.

This means property prices would rise by a lower than expected 2.5 per cent.

To give thrust to the low cost housing schemes for the urban poor, he announced exemption of service tax on constructions under Jawaharlal Nehru Urban renewal Mission and Rajiv Awas Yojna.

Real estate developers as well as Urban Development Minister S Jaipal Reddy had asked the finance minister to review the proposal, saying that the proposal would hit the sector which is recovering from a huge slowdown in demand.

In Budget 2010-11, the finance minister brought development of real estate complexes under the ambit of service tax.

"In the construction of complex services, it is being provided that unless the entire consideration for the property is paid after the completion of construction (i.e. after receipt of completion certificate from the competent authority), the activity of construction would be deemed to be a taxable service," says the Budget proposal.

Post-budget, Finance ministry officials had clarified that service tax would be imposed on 33 per cent of selling price as there is an abatement of 67 per cent.

Replying to a debate on Finance Bill, 2010-11, Finance Minister Pranab Mukherjee said he had decided to lower excise duty on hand-made cheroots priced up to Rs 3 per stick to 10 per cent following demands from members and the industry.

He also announced an over Rs 241 crore (Rs 2.41 billion) relief package for coffee growers by way of waiving three-fourth of loans taken prior to 2002, especially by small farmers, while restructuring repayments for the rest.

Mukherjee, however, did not roll back the hike in excise and customs duty on petrol and diesel, saying that the government has to look at ways of meeting the Rs 85,000 crore (Rs 850 billion) revenue loss on fuel sale expected this fiscal.

The opposition NDA and the Left parties staged a walkout in protest against the government's decision not to roll back the Rs 2.71 a litre increase in petrol and Rs 2.55 per litre hike diesel rates.

With a view to giving impetus to health care, the Minister announced tax breaks for construction of hospitals with at least 100-bed anywhere in the country.

On construction of real estate complexes, which has been brought in the ambit of service tax in this year's budget, Mukherjee increased the tax concession by offering more abatement.

Abatement (tax rebate) has been increased to 75 per cent from 67 per cent of the gross value of property that includes land value.

Mukherjee said service tax on air travel will not have any adverse impact as it is not linked to fare and has been capped at Rs 100 for domestic travel and Rs 500 for international travel.

The minister, in his reply to the Finance Bill debate, said that he received complaints from various quarters saying the levy would adversely affect the civil aviation sector and would make air travel prohibitive.