1 in 4 workers in India commute over 90 mins/day 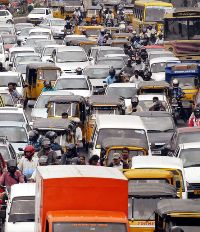 Long-distance commuting is still the norm despite progress in flexible working practices with 20 per cent of commuters globally and 26 per cent in India travelling over 90 minutes everyday, a survey revealed.

Although in India the average commuting length is 29 minutes, a disheartening 12 per cent of commuters travel more than an hour to and from the place of work, according to a survey by Regus,a leading global workplace solutions provider.

In India car use is on average with 67 per cent of respondents driving to work.

Other popular modes of transport are motorcycles at 12 per cent, far more popular here than anywhere else, and taxis with nine per cent of respondents declaring this is as their mode of transport to work.

Among the least popular modes of transport in India is cycling with less than one per cent preferring this way of travelling.

While on average seven per cent of commuters globally spend 10 per cent or more of their salary on commuting, in India the average spend for commuting is 4.1 per cent of yearly salary.

Nevertheless, one in 10 respondents (11 per cent) spend 10 per cent or over of their yearly take-home salary to fund their commute while 16 per cent spend between 5-10 ten per cent.

Globally, cars are by far the most popular form of commuter transport (64 per cent).

Source: PTI© Copyright 2022 PTI. All rights reserved. Republication or redistribution of PTI content, including by framing or similar means, is expressly prohibited without the prior written consent.
Related News: India, Regus
Print this article