Obama's new mantra: Go for 'Made in America' 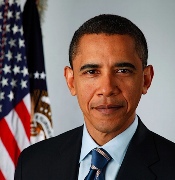 US President Barack Obama said that America will not settle for the second place in the international community when other countries like India, China, Germany and South Korea are competing and fighting for the jobs of the future.

"Other countries that are out there, they are competing; they are fighting for the jobs of the future. India China, Germany, South Korea. Let me tell you, the United States of America does not play for second place. We play for first place," Obama said while addressing an election campaign in Milwaukee.

He said that the US was going to rebuild its economy and rebuild it better and stronger than it was before. "At the heart of that strategy will be three powerful words: 'Made in America'. We are going to make things right here in the United States of America and sell them all around the world," he said.

"So instead of giving tax breaks to companies that ship jobs overseas, we want to cut taxes for small-business owners who create jobs right here in the United States of America," Obama said.

The US President said his administration wants to jump-start a homegrown clean-energy industry. "I don't want to see new solar panels and wind turbines and electric cars manufactured someplace else. I want to see them stamped with 'Made in America,' by American workers," he said amidst a round an applause.

Obama said the US is investing in a 21st-century infrastructure, not just new roads and bridges, but faster Internet access and high-speed railroads, projects that can lead to hundreds of thousands of new private-sector jobs.

"These ideas shouldn't be Democratic or Republican ideas; they are commonsense ideas. Yet, most of the Republicans in Congress voted no on just about every one of these policies.

"You remember when I was running, we had a little slogan, 'Yes, We Can'? These guys' slogan is, 'No, We Can't.' No, on closing loopholes for companies that ship jobs overseas. No, on the tax cuts for small businesses. No, on the clean-energy jobs. No, on the railroad and highway projects," he said.

Obama said the America he believe in, that always moves forward, rewards hard work instead of greed, rewards responsibility instead of recklessness.

How India and China can help each other