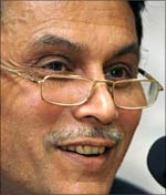 Amid reports that it may not want market regulator SEBI Chairman C B Bhave to continue beyond February next, government has kicked off a search process for the next incumbent.

A high level search panel, headed by Cabinet Secretary K M Chandrasekhar, has been constituted by the government for the purpose, though it is said that Bhave himself could apply for the fresh term after his three-year stint ends in February 2011.

Finance Secretary Ashok Chawla is also part of the panel. While no communication could be established with Bhave, names of Chairman of State Bank of Indian O P Bhatt, National Stock Exchange Chief Ravi Narayan, a top finance ministry officer K P Krishnan, who is now part of the Prime Minister's Economic Advisory panel, are doing the rounds.

SEBI had moved the Supreme Court against Insurance Regulatory Authority on the issue of managing Unit Linked Insurance Policies (ULIPs) of insurance firms before government stepped in to decide on a turf issue between the two regulators and enacted a new law this month for the purpose.

The row between SEBI and IRDA followed after the market regulator, in a late night order on April 10, banned 14 insurance companies from operating ULIPs. Bhave, who was chairman of the National Securities Depository Limited (NSDL), was appointed SEBI chief in February 2008 when P Chidambaram was the Finance Minister.

He took from M Damodaran who had refused to appear for interview before the then search panel to seek a second term. The search panel, sources said, will suggest two three names for SEBI chairman's post.

The financial selection, however, will be made by the Appointments Committee of Cabinet (ACC) on a proposal to be mooted by the Finance Ministry.