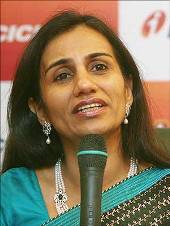 ICICI Bank said on Thursday it expects upward pressure on interest rates from the second quarter of the next fiscal, as investment activities will be on an upswing from that time onwards.

"Clearly, we see no immediate pressure on interest rates. But we will see upward pressure on interest rates -- not from the beginning of the next fiscal, but I would say, from the second quarter of the next fiscal," ICICI Bank chief executive officer and managing director Chanda Kochhar told reporters on the sidelines of the Diamond Jubilee celebrations of the PTI in New Delhi.

Meanwhile, ICICI Bank chairman KV Kamath, however, said he expects interest rates to go up only towards of the end of this year.

"But for the first nine months, I don't think there is real pressure (on interest rates)," he said, adding, "I think liquidity has to come down to provide an upward push to interest rates. So, till then nothing will happen."

Asked whether the cash reserve ratio hike by the Reserve Bank of India will have an impact on the interest rates, ICICI Bank chairman Kamath said, the RBI has taken a step to signal that it is on the watch mode and it is watching inflation.

Liquidity is so deep in the system today that it not going to impact interest rates immediately, he said. Kochhar said interest rates are not driven so much by policy announcements of the RBI, but demand and supply of credit and level of liquidity.

"Interest rates are driven not just by policy announcements, but more by demand and supply of credit and liquidity. Currently since there is enough liquidity, my view is that there would not be any immediate pressure on interest rates," Kochhar said.

Last week, the RBI raised the CRR -- the amount lenders need to keep with the central bank to meet prudential requirements -- by 75 basis points to suck out Rs 36,000 crore from the system and cool down inflation.