US Fed on tackling housing bubble 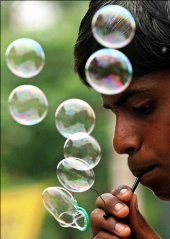 In the backdrop of the US economy slowly improving, the US Federal Reserve chairman Ben S Bernanke has said that stricter regulatory measures would be the 'best' response to tackle housing bubble.

Bernanke pointed out that stronger regulation and supervision would have been more effective to constrain the housing bubble than a general increase in interest rates.

Speaking at the annual meeting of the American Economic Association on Sunday, he noted the main source of lower initial monthly payments -- which allowed more people to enter the housing market -- was not on account of 'the general level of short-term interest rates'.

Bernanke, who is awaiting confirmation for the second-term as Fed Chief, said the trend was due to increased use of exotic type of mortgages and general decline in underwriting standards.

"That conclusion suggests that the best response to the housing bubble would have been regulatory, not monetary," Bernanke added.

Reckless sub-prime lending coupled with exotic mortgage instruments have been largely blamed for the financial crisis.

"The crisis revealed not only weaknesses in regulators' oversight of financial institutions, but also more fundamentally, important gaps in the architecture of financial regulation around the world," he said.

After being hit by one of the worst financial turmoils since the 1930s Great Depression, the US regulators are looking at ways to strengthen regulations and supervisory policies.

Source: PTI© Copyright 2021 PTI. All rights reserved. Republication or redistribution of PTI content, including by framing or similar means, is expressly prohibited without the prior written consent.
Related News: Bernanke, US Fed, American Economic Association, Federal Reserve
Print this article