In a first, Maha asks Videocon to shift SEZ 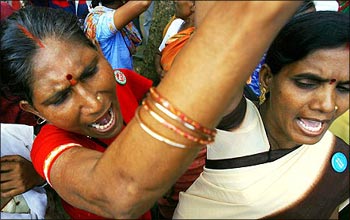 The Maharashtra government has offered 2,000 acres to Videocon Group for the development of a multi-purpose special economic zone in Pune's Saswad taluk.

This comes close on the heels of Wednesday's decision to withdraw permission to the Rs 20,000-crore (Rs 200 billion) Group for setting up an SEZ in adjacent Wagholi taluk in response to the pressure from local farmers.

The Group has so far spent Rs 10 crore (Rs 100 million) on the project. This is the first SEZ out of the 146 SEZs proposed in Maharashtra that has been officially wound up.

While the MahaMumbai SEZ is proposed on 10,000 hectares of land, other SEZs are being planned on land ranging between 1,000 and 3,000 hectares.

In Goa, the state government has asked the Centre for denotification of three zones due to protests.

In addition, developers such as DLF have voluntarily sought denotification citing a fall in demand after the global economic crisis.

In Maharashtra, though BoA, an inter-ministerial body at the Centre, had approved the Wagholi SEZ in-principle in 2006, it was not notified. So, the state government exercised its powers to issue cancellation of SEZ through a directive by the Pune district collector.

Chief Minister Ashok Chavan during his meeting held two days ago with the Videocon Group chairman V N Dhoot clarified that the government had already taken a decision that land acquisition under duress would not be done for SEZ developments.

Sources privy to the discussions said that Chavan instead suggested the alternative site to the Videocon Group in Saswad taluk.

"Ever since BoA's approval for the Wagholi SEZ, farmers are against the project. The state-run Maharashtra Industrial Development Corporation and Videocon Group had entered into a memorandum of understanding for the development of SEZ.

Subsequently, MIDC under the MIDC Act issued the notification under Chapter 6 for the acquisition of 3,000 acres.

However, due to strong opposition from the farmers, the state government stayed the project in November 2007," a senior state government official, who did not want to be quoted, told Business Standard.

Incidentally, the Nationalist Congress Party and its president and Union Minister for Agriculture Sharad Pawar upheld the farmers' cause.

Dhoot admitted that the Group could not make any substantial move in the acquisition of land for the Wagholi SEZ due to largescale opposition from farmers.

He said the Group had already held talks with several European companies for their investments in the Wagholi SEZ. Besides, they had set up some of their units.

Further, the Videocon Chairman admitted that his Group was facing similar opposition in the proposed SEZ near Walunj, Aurangabad district.

The project has received in-principle clearance, but land acquisition is taking place at a slow pace.