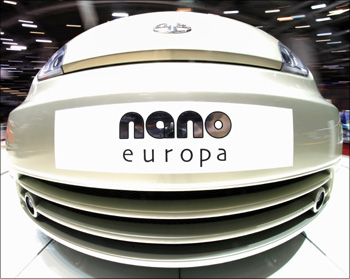 The world's cheapest car, Tata Nano, that sells for $2,500 in India, may be find its place in the United States garages at double the price when it is commercially launched in America, but would still be the lowest-priced car in America.

The cheapest vehicle in North America costs about $9,000-10,000 "so one could speculate that half of that -- over $5,000 -- is a possible price point" for the Nano in the US and is still way cheaper than the lowest priced car, a Tata Technologies official told PTI at the Detroit Science Centre, where the car is on display for the US audience for the first time.

The official, who did not wish to be named since the decision on price would rest with Tata Motors, said the over $5,000 price range could also take into account all the necessary safety and emission requirements needed to ensure that Nano is fit for the US roads.

Tata Technologies, part of the Tata Group, has brought the 'Champagne Gold Nano LX' from Pune, India to Detroit for an event titled 'Better Innovation', which was attended by media and auto company officials.

At the event Tata Technologies CEO and managing director Patrick McGoldrick said by bringing the Nano to the US, he hopes to stimulate some out of the box thinking, "create some sort of buzz and excitement that one can do something different".

Later he read out a letter to the company customers in which Tata Group chairman Ratan Tata had said that the Nano which was being displayed in the US for the first time "represents the execution of a simple concept of an affordable, all-weather family transport".

Those attending the event wanted to know as to when would the $2,500 car be available in the US market.

Earlier this month at the New Delhi Auto Expo, Tata Group chairman Ratan Tata had said the firm will consider launching Nano in the US in the next three years as there is a market for the car not only in developing countries but also in developed countries.

Emphasising that his company "was not in a position to comment on Tata Motors' product strategy" and price specifics, Tata Technologies president and COO Warren Harris said the cost of the Nano in the US "would obviously be more than the $2,500 that is the price in India."

"Obviously the structural changes that would need to be made, the changes required as far as emissions are concerned and some of the features that would be appropriate to add to the vehicle for the North American market would drive up the price point," he said.

Harris said Nano's price in the US should be "fundamentally lower than any other vehicle in the country.

The previously most affordable car in India retailed at $5,000 and the Nano retails at half that price. "I suspect Ratan Tata is going to make a similar impact here," he added.

If the Nano is to be retailed in the US, it has to have changes that comply with emission standards, besides making other adjustments in design and more features, Harris said.

On where the US Nano could be manufactured, Harris said: "All of that would have to be researched and be part of the decision making in and around the product entry in North America since Tata Motors today does not have a footprint in North America."

Tata Motors already has Nano Europa, a slightly jazzed-up version of the plain vanilla Nano. Nano Europa could make its debut into the European market in 2011 at between $5,000 and $8,000.

A Chrysler official, who did not wished to be named, said if the Nano is sold in the US, it would pose a challenge to his company not so much because of the price but due to Nano's "innovativeness, which is most interesting".

However, he immediately added: "Since Chrysler today is not in the low-cost car segment, the car itself is not any competition for us."

Image: The Tata Nano Europa car at the 79th Geneva Car Show at the Palexpo in Geneva. Photograph: Denis Balibouse/Reuters