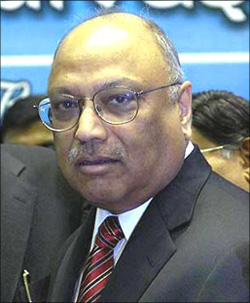 The cost of corruption to the country could exceed Rs 250,000 crore (Rs 2,500 billion), management guru C K Prahalad has said.

Delivering the Seventh Nani A Palkhivala Memorial Lecture in Mumbai on Thursday, he highlighted the funding of election campaigns by politicians and the return they try to achieve after they win as one of the basic reasons for corruption in the country.

The 2009 Lok Sabha elections are reported to have cost the country Rs 10,000 crore (Rs 100 billion). Of this, Rs 1,300 crore (Rs 13 billion) was spent by the Election Commission and Rs 700 crore (Rs 7 billion) by the Centre and state governments. The remaining Rs 8,000 crore (Rs 80 billion) were spent by political parties and individual candidates.

If the cost of state elections were also covered, this could easily exceed Rs 25,000 crore, he said.

"I cannot but assume that private funding of elections of this magnitude is predicted on making an appropriate return," he said, pointing out, "Given the risky nature of the investments in elections, politicians as venture capitalists, we can assume, will not settle for less than a 10-fold return."

Chalking out a road map for the country, he called for reducing the irregularity of information, reduce the number of points of interpretation of laws and asked for an increase in accountability.

He called the unique identification programme of the government as the building block of social justice and asked to focus on massive education so that inequality of opportunity is eradicated.

"India is at an interesting crossroads," Prahalad said, adding, "It must choose. The path to progress needs significant innovations and a discarding of the old and acceptance of the new."

He said the crisis in India is one of leadership. "There is no one who is willing to articulate a view of India and Indianness with clarity and force so that the country can come together and make the sacrifices needed to build a new India that the framers of the Constitution imagined," he said.

Why Google dumping China is good for India