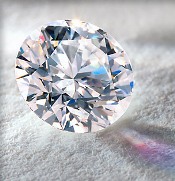 The explorations by the world's biggest diamond producer De Beers and the country's largest iron ore miner NMDC have found traces of kimberlite and lamproite in Orissa, Andhra Pradesh and Karnataka, indicating possible diamond deposits there.

Surveys are also underway in these states to detect gold mineralisation, the government said today. It said explorations in the three states had resulted in discovery of 41 kiberlites and 13 lamproite pipes.

Complex volcanic magmas solidify into kimberlite and lamproite and work as the elevators that bring diamonds with other minerals and mantle rocks to earth's surface. "So far, a total of 339 Reconnaissance Permits (RPs) have been issued covering an areas of 4,66,556 sq. km, out of which aerial surveys have been conducted in 27 RPs," an official statement by the Mines Ministry said.

It said kimberlite and Lamproites were discovered in Kalahandi, Nawarangpur, Nuapada and Bolangir districts of Orissa.

Kurnool, Prakasam and Anantapur districts in Andhra Pradesh also had these deposits. Explorations by CRA Exploration India Pvt Ltd in the state indicated discovery of several mineralised zones in Anantapur and Kurnool districts.

In Karnataka, these were discovered in Gulbarga district. The ministry said exploration permits had been given to several companies.

Explorations in certain areas of Madhya Pradesh and Chhattisgarh did not indicate major discoveries while exploration is in progress in Chitrakoot in Uttar Pradesh.

"Besides the above, the Airborne Mineral Survey and Exploration (AMSE) Wing of the Geological Survey of India (GSI) has, since its inception in 1965, carried out aerial surveys," the statement said.

"GSI has been equipped with a new heliborne system costing Rs 52 crore (including helicopter and sensors) for airborne survey and a new deep sea vessel costing Rs 448 crore (Rs 4.48 billion) is being procured with latest state-of-the-art technology for marine survey in offshore areas," the statement added.

This will reposition GSI to help discover and exploit offshore mineral resources. A total area of 4,21,917 sq km has been flown in geologically favourable zones for targeting mineral resources which include rural and backward areas.
Meanwhile, coal exploration is going on in Maharashtra and gold mineralisation is being studied in Orissa, Andhra Pradesh and Karnataka.