Markets bucked early trends and ended on a flat note, as buying resumed in select PSU and banking stocks.

The Sensex opened near the day's low of 17,856 and gained strength in morning trades. The index touched a high of 18,005. However, the index became volatile in a narrow range, thereafter, and finally ended down 27 points at 17,928. 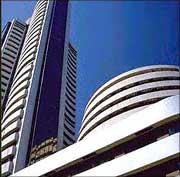 BSE mid and small-cap indices outperformed the broader markets and ended with marginal gains. The mid-cap index added 0.2% at 7,397 and the small-cap index jumped 0.14% at 9,456.

NTPC gained 2.2% at Rs 203. Reliance Communications added 2.2% to Rs 191 on reports of a stake sale to Emirates Telecommunications.

Hindalco added 1.5% to Rs 152. Larsen & Toubro and HDFC were up 1% each. SBI, HDFC Bank and Mahindra & Mahindra were other gainers in the market today.

TCS, BHEL, Jaiprakash Associates and Reliance Infrastructure were down 1% each. Other losers included Tata Motors, Hindustan Unilever and Reliance.

The volume chart was led by FCS Software with trades of over 16 million shares, followed by Sanraa Media (15.40 million), IFCI (10.01 million) and Karuturi Global (6.80 million).