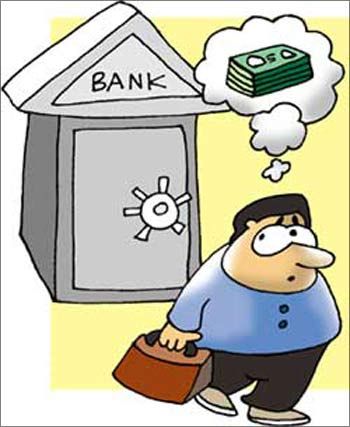 Investors in fixed deposits would be a happier lot after the Reserve Bank of India's moves in the First Quarter Review of Monetary Policy. But potential home loan borrowers may not be happy.

But home loan teaser rates, where banks like the State Bank of India (SBI) and ICICI Bank and non-banking financial institutions like Housing Development Finance Corporation (HDFC) and LIC Housing Finance are offering fixed rates for the initial few years may be under some pressure.

At present, SBI and HDFC are offering home loans at 8 per cent and 8.25 per cent for the first year. The SBI Easy Home loan scheme will expire on September 30.

Bankers felt these rates may not be extended because of the rising cost of funds. Bank of Baroda chief Economist and general manager, Rupa Rege-Nitsure said, "When costs of funds will move up, it will be difficult to continue with the teaser rate scheme. Continuing such schemes will be detrimental to the financial health of banks. They will put pressure on margins."

By RBI data, the gap between credit and deposit growth is on the rise and was 7 per cent as on July 2. This implies that banks, to raise fresh funds, will have to raise deposit rates. This, in turn, is likely to put pressure on the teaser rates, besides other lending rates. Both State Bank of India and ICICI Bank have kept the first-year fixed rate at 50 and 75 basis points above their base rate of 7.5 per cent.

"A rate hike is quite inevitable. It may happen slowly, though, within the next two-three months. For a change, deposit rates might move up earlier than lending rates," said Harsh Roongta, CEO, apnapaisa.com, an online loan portal. However, he felt banks may not be too keen to raise rates soon because of the low offtake in retail loans. This has primarily happened because of high asset prices.

Given the tight liquidity conditions, deposit rates might rise earlier. At present, the deposit rates of leading banks for one-two years is 6-6.5 per cent. One could expect to see at least a 25-50 basis point rise in these rates. "Smaller banks could hike rates by even 75-100 basis points. A depositor looking for a good deal could wait for some time," said Gaurav Mashruwala, a financial planner.

Debt fund investors who were looking for some definitive direction may have to wait for some more time. Financial advisors said investing in short-term (six months to one year) schemes make more sense.

The annual category average returns from short-term debt funds have been 4.84 per cent. The best funds, Templeton India Short-Term Income and HDFC HI Short-Term have returned 7.45 per cent and 6.48 per cent, respectively, in the same time period. In the past six months, returns have been 2.34 per cent, says Value Research, a mutual fund research agency.

Another option for the investor with a six-month to year's time frame could be fixed maturity plans (FMPs). Though FMPs cannot declare indicative portfolios or indicative yields any more and have to be listed at stock exchanges, industry experts expect new FMPs with a three-six month horizon to deliver annualised returns of 6-6.5 per cent. One-year FMPs that are being launched could offer up to 7 per cent.

"However, an investor should be very clear about the time horizon, as these schemes will be listed at the exchanges. As a result, exiting in the interim might result in heavy losses because of the lack of a secondary market," said Hemant Rustagi, CEO, Wiseinvest Advisors.

For investors with a longer time horizon -- between one and two years -- debt funds with a mix of gold could be a good option. Two fund houses -- Religare MF and Canara Robeco Asset Management Company -- have launched schemes where 70-80 per cent of funds will be invested in debt instruments and the rest in gold. The gold component could boost returns.