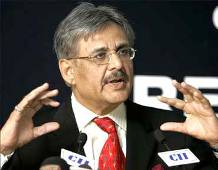 in recognition of his efforts towards empowering India's rural agricultural community and conserving the environment.

The award was presented to Deveshwar during USIBC's 35th Anniversary Summit, 'A Pivotal Period in US-India Relations: Tackling Education, Infrastructure & Inclusive Growth', in Washington on Wednesday.

USIBC said that under Deveshwar's leadership, ITC Ltd has invested in rural initiatives across India while embracing environmentally-friendly practices at its headquarters and field offices, besides equipping all ITC-Welcomgroup Hotels, Palaces and Resorts with green technologies.

ITC-Welcomgroup is India's second-largest hotel chain. ITC Ltd, which figures in the Forbes Global 2000 list of companies, is one of India's top agricultural exporters.

The company is well-known for empowering India's vast farming community through the provision of computer-generated information on instant pricing, weather and commodities to rural India through its innovative e-Choupal Initiative.

It reaches out to more than four million farmers across eight Indian states. Deveshwar joined ITC in 1968.

He was appointed as a director on the company board in 1984, and later became its chief executive and chairman on January 1, 1996.