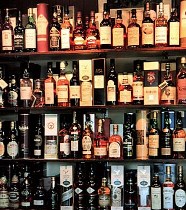 The revenue from the license of liquor shop touched an all time high as the process of opening more than 48,600 bids started on Monday in all the 23 districts of the state.

Hiralal Samaria, state excise commissioner on Tuesday announced that the government has received Rs 6,904 crore (Rs 69 billion) from the auction of licenses of 6,505 retail liquor shops till now and the license for the remaining 91 shops was likely to earn another Rs 50 crore (Rs 5 billion). The process of issuing the licenses for all the shops is expected to be completed by Wednesday.

As the sealed bids were opened in Hyderabad and the headquarters of all other districts on Monday, there was not a single bidding which was not more than couple of crores.

The amount that the government has received for the licenses for the period of 2010-12 was more than double of the previous two year license fee of Rs 3,200 crore (Rs 32 billion).

With this the income from the excise department will touch an all time high.

The competition for the liquor shop licenses was so high this year that the government earned more than Rs 48 crore (Rs 4.8 billion) from the sale of application forms alone.

The income from excise and sales tax on the liquor to be sold will be in addition to the license fee. This is expected to rake in double the amount, making the excise department the highest earner of the revenue for the exchequer.

The real estate dealers and builders too have entered the race for the retail liquor shops making the bids expensive from the early years.

This year the rush was huge that the government had to hire stadiums to accommodate all the stake holders.

In Visakhapatanam, the highest bid of Rs 4.72 crore (Rs 47.2 million) was made for a retail liquor shop at Chinna Waltair.

Another bid of Rs 4.45 crore (Rs 44.5 million) was made for another shop in Old Alwal area of Ranga Reddy district in Hyderabad.

This year the number of applications was 125% more than the previous year. Though expected a revenue of Rs 3,700 crore (Rs 37 billion), the stiff competition took it beyond the expectations. The bidders had quoted around 40% more than previous auction.

The auction of the licenses for liquor shops has also evoked strong protests from the various quarters including political parties like Lok Satta and Telugu Desam.

A few workers of Lok Satta were arrested when they tried to hold a demonstration near Indira Park in Hyderabad.

To oppose the government policy, some unknown persons tied beer bottle to the hands of the statue of Mahatma Gandhi in Kasi Bugga town of Warangal district.

"This is shame on government as it is encouraging the consumption of liquor to fill its own coffers. If government is not ashamed why the protestors should be ashamed", asked Sandhya, leader of Progressive Women's Organisations.

In another protest, Narayana, a resident of Warangal district filed a petition in Andhra Pradesh High Court seeking imposition of prohibition in the state. He alleged that the government's policy of encouraging the consumption of liquor was destroying the lives of the people.

Accepting the petition for hearing, the court issued a notice to the state and the central government.

Telugu Desam spokesperson A Revanth Reddy said that Congress had forgotten the promise of bringing prohibition in a phased manner and was busy encouraging the consumption of liquor.

He said that apart from earning more than Rs 4000 crore (Rs 40 billion) from the auction of licenses, the government will also earn an excise revenue of Rs 15,000 crore (Rs 150 billion).

The poor people will suffer because of this policy, he added.

In 1990s, the women of Andhra Pradesh were in the forefront of anti-liquor campaign and had forced NT Rama Rao government to impose total prohibition from 1994 to 1996. But this time a large number  of women participated in the auction for licenses.

Officials said that nearly 15% of the bidders were women. Many politician including ministers and MLAs were believed to be in the race but others were acting as their front men, said sources.