The UK has initiated moves to scrap the controversial 5 billion pounds national Identity Card scheme, with the new Home Secretary Theresa May declaring it "intrusive, bullying and ineffective." 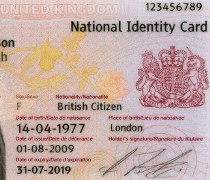 Stating that she is very pleased to wield the axe on the proposed national identity cards and this would lead to a "Millennium Dome's" worth of savings - or nearly 900 million pounds for the taxpayer.

Scrapping of the cards proposed by the outgoing Labour regime was one of the main election planks of the Conservative party.

Speaking in the House of Commons yesterday during the second reading debate of the identity Documents Bill which will invalidate all existing cards within one month of the Bill becoming law, Mrs Theresa said "the national identity card scheme represents the worst of Government. It is intrusive and bullying, ineffective and expensive. It is an assault on individual liberty that does not promise a great good. The Bill is therefore partly symbolic, it sends a message that the Government is going to do business in a different way. We are the servants of the people and not their masters."

The Government will also destroy all information held on the National Identity Register, effectively dismantling it.

The role of the Identity Commissioner, created in an effort to prevent data blunders and leaks, will be terminated.

Around 15,000 members of the public who had paid 30 for one of the cards would not be compensated, she said.

Shadow Home Secretary Alan Johnson said Labour would not vote against the Bill, as he accepted the mandate of the Government to abolish them, but he pointed out the "inconsistency" of the Tory position, as they had backed ID cards up to and through the 2005 general election.