The shocking picture of inflation in India! 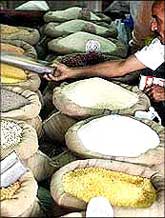 Today, the biggest concern facing the country is rising prices. There is uproar in Parliament as political parties jostle to grab as much mileage as possible from the government's apparent failure to curb runaway inflation, as they try to sidle up to the aam aadmi who has been worst hit by skyrocketting prices.

Food inflation is hovering near 20 per cent. Everyone is facing the brunt of rising prices. Food prices are soaring. . . all essential items like vegetables, oil, milk, sugar are getting costlier. Rentals and real estate rates have almost doubled in just a few months in most cities. The real estate prices are at record highs making life miserable, especially for people who have migrated to cities for jobs.

Inflation hits you badly as prices keep rising. You end up spending more money for things that you could buy for les earlier. What you could buy for Rs 100, some months ago, would now cost you nearly double. As a result, your savings will come down. As prices rise, the purchasing power of money goes down too.

Economists attribute inflation to a demand-pull theory. According to this, if there is a huge demand for products in all sectors, it results in a shortage of goods. Thus prices of commodities shoot up.

Another reason for inflation is the cost-push theory. It says that labour groups also trigger inflation. When wages for labourers are increased, producers raise the prices of products to make up for salary hike.

This is how food prices have risen since 2007:

Spiralling global crude oil prices have worsened the situation. Sometimes, banks create more liquidity by allowing more loans for people, giving them the purchasing power to buy more, as a result of which prices are driven up further. The demand-supply gap also drives inflation rates.

Finance Minister Pranab Mukherjee, after he presented the Budget on February 26, said that "taking into account all the increases, inflation will be around 0.4 per cent in WPI (wholesale price index). We have announced a number of measures  (to control inflation). For instance, you have to step up domestic supply, but it will take some time. So, you have to bridge the gap by imports. Whatever steps were needed we have taken. We have given duty concessions. We have allowed duty-free imports by putting items under OGL (open general licence).'

"To ameliorate the sufferings of the vulnerable sections, at least the persons below the poverty line, we have provided subsidised articles like edible oil with a subsidy of Rs 15 per litre. We are requesting the states to distribute it. In the next couple of months, it will have a moderating influence," the finance minister said.

But when will these measures help in bringing down inflation and food prices? Your guess is as good as ours.