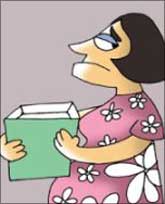 India has the lowest percentage of women employees (23%), followed by Japan (24%), Turkey (26%) and Austria (29%), according to the Corporate Gender Gap report brought out by the World Economic Forum on Monday.

Leading companies are failing to capitalise on the talents of women in the workforce, according to the report.

Meanwhile, the United Nations Development Programme-sponsored 2010 Asia-Pacific Human Development Report released on Monday said that lack of women's participation in the workforce costs the region billions of dollars every year. In countries such as India, Indonesia and Malaysia conservative estimates show that GDP would increase by up to 2-4 percent annually if women's employment rates were raised to 70 percent, closer to the rate of many developed countries.

In South Asian countries like India and Pakistan fewer than 35 per cent of women do paid work, the UNDP report said.

The problem of 'missing girls' -- in which more boys are born than girls, as girl fetuses are presumably aborted, and women die from health and nutrition neglect --  is also growing.

China and India together account more than 85 million of the nearly 100 million 'missing' women estimated to have died from discriminatory treatment in health care, nutrition access or pure neglect.

"The findings of The Corporate Gender Gap Report are an alarm bell on International Women's Day that the corporate world is not doing enough to achieve gender equality. While a certain set of companies in Scandinavia, the US and the UK are indeed leaders in integrating women, the idea that most corporations have become gender-balanced or women-friendly is still a myth. With this study, we are giving businesses a one-stop guide on what they need to do to close the corporate gender gap," said Saadia Zahidi, co-author of the report and head of the Forum's Women Leaders and Gender Parity Programme.

"Women account for one-half of the potential talent base throughout the world and therefore, over time, a nation's competitiveness depends significantly on whether and how it educates and utilizes its female talent," said Professor Klaus Schwab, founder and executive chairman of WEF.

The report is based on a survey of 600 heads of human resources at the world's largest employers. The survey contained over 25 questions and assessed companies on representation of women within their establishments and the use of gender-equality practices such as measurement and target setting, work-life balance policies and mentorship and training.

The survey also asked respondents to identify the biggest barriers to women's leadership and their opinion on the probable effects of the economic downturn on women's employment in their countries and industries.

UNDP is ignorant and insolent