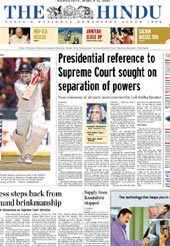 Key members of the family and directors on the board of Kasturi & Sons, who are opposed to the Editor-in-Chief and Publisher of the group publications, N Ram, are considering moving the Company Law Board (CLB) over issues about the running of the group.

A member of the board of Kasturi & Sons, which publishes The Hindu and The Hindu Business Line newspapers, apart from the Frontline magazine, confirmed that going to CLB was an option, though no final decision had been taken. If this option is exercised, it will open a new front in the battle that has been raging since The Indian Express reported a power struggle in the venerable The Hindu's boardroom, largely over Ram's alleged reluctance to retire when he turns 65 this May. Ram has threatened defamatory proceedings, civil and criminal, against the editors and publisher of The Indian Express.

The two newspapers, old hands at campaign journalism, are not shying away from using the space available to them. With Twitter, the new-age bank of quotes being used liberally by the family members, there is no shortage of good lines to fill that space. So Ram's threat of defamation proceedings against The Indian Express elicited a tweet from family member N Ravi that it was not in keeping with The Hindu's stand that this repressive tool should not be used against journalists.

Kasturi & Sons has 12 board members. The families of each of the four cousins, who together control the entire equity, has three members on the board. There are just under 50 shareholders -- all of them members of the Kasturi Ranga Iyengar family. The cousins are G Narasimhan (father of N Ram, N Ravi, N Murali), S Parthasarathy (father of Malini Parthasarathy, Nirmala Lakshman and Nalini Krishnan), S Rangarajan (father of Ramesh Rangarajan, Vijaya Arun and Akila Iyengar), and G Kasturi (father of K Balaji, K Venugopal and Lakshmi Srinath). Members of the families of the four cousins -- sons of Kasturi Srinivasan and Kasturi Gopalan (the second-generation owners)  own 25 per cent equity each.

The crux seems to be the appointment of K Balaji as the new managing director, after re-designating N Murali as senior managing director despite opposition from some family members. Some of the board members also seem to have raised questions on the appointment of Ram's daughter Vidya as the London correspondent and nephew Narayan Lakshman as the Washington correspondent of The Hindu.

At the board meeting of Kasturi & Sons last Saturday, Managing Director Murali was re-designated senior managing director. However, despite the apparent higher position, his responsibilities were limited to full charge of the circulation and shared responsibilities for accounts and industrial relations with Balaji.

In the earlier position, Murali, who has been a part of the group for four decades, had wide-ranging supervisory powers, cutting across departments. It seems one faction in the board wanted Murali's powers curtailed and confined to circulation alone.

However, after the board reconvened the same day there seem to have been opposition from other members leading to Murali getting a say in accounts and industrial relations as well. Some members still appear opposed to the appointment of the new managing director.

Ram also says that the key decisions of the board last Saturday were taken either by a majority of 9-3, or unanimously, depending on the resolution and the subject. "If any director defies or flouts the majority decision of the board, that is tantamount to subverting the mandate of the board and the company," he says.

A vital decision taken last Saturday, he says, was that the board of directors will supervise and coordinate the work of all whole-time directors and will have responsibility for all the departments. No individual, not even the two managing directors, will now have that responsibility and supervisory powers over other directors.

Then there is the issue of the new appointments. Under central government rules, a decision to include a family member in the organisation with a remuneration of more than Rs 50,000 a month requires the clearance of the central government. There are charges that Lakshman and Vidya were sent to their locations before the clearances came.

Lakshman was sanctioned $10,000 and Vidya 5,000 pounds as advances from the company. However the central government sent some queries to the company asking for details on the procedures followed or whether a selection committee was set up to appoint them. In order to reply to these questions a board resolution was initiated by Ram which was opposed by some members on the ground that he was an interested party.

Ram has a different version. "The two appointments of relatives of directors have been done meticulously in accordance with the requirements of law: Approval by the board, approval by the shareholders, and central government approval. There was no violation of any kind." He says it is elementary that advances for travel expenses on editorial or business assignments are completely different from remuneration or salaries, which are contingent on employment. "I declared an interest in my daughter's appointment and did not participate in any matter in which I should not have."

Those opposed to Ram say that in September last year at an informal gathering of family members he made a commitment to retire at 65, and said that his position would be taken by another family member, N Ravi. However in February he said he would continue in his current office. Ram, however, says that as per written record no retirement age, 65 or otherwise, is specified for directors. He also says that no board meeting was held in September 2009 in which he agreed to step down at 65.