Greece to get $1-trillion aid package 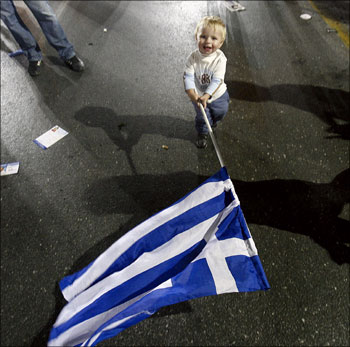 Eurozone leaders have agreed on a bailout package of nearly $1 trillion (750 billion euro) for Greece, as part of their concentrated efforts to prevent the debt crisis contagion from spreading to other nations.

In a marathon 11-hour-long session that lasted till early morning on Monday, finance ministers from the 16 Eurozone countries, along with International Monetary Fund officials, agreed on a three-year aid plan for Greece.

Under the plan, the European Union Commission will make available 60 billion euros ($75 billion), while countries from the 16-nation Eurozone would provide bilateral backing through 440 billion euros ($570 billion).

The IMF would contribute an additional sum of at least half of the EU's total contribution, or 250 billion euros ($325 billion).

"The programme adopted by the Greek government is ambitious and realistic. It addresses grave fiscal imbalances, will make the economy more competitive, and lay the basis for job creation and stronger and more sustainable growth," the Eurozone leaders said in a statement.

"We fully support the ECB in its efforts to ensure the stability of the Euro area," it added.

The European Central Bank has announced that it would intervene in government bond markets and join the US Federal Reserve Bank and other central financial institutions in reactivating extra US dollar liquidity facilities.

Reports said that the package was more than what was anticipated, and had given a spurt to Asian stock markets when they opened on Monday. While Japanese benchmark index Nikkei 225 was trading up 1.6 per cent, Hong Kong's Hang Seng index climbed up by over 2 per cent and South Korea's Kospi gained nearly 2 per cent in the late afternoon trade.

Last week, stock markets across the globe had slumped as rising concerns over the worsening European debt turmoil sparked a massive sell-off by investors.

Earlier, global rating agency Moody's had warned that the Greece debt crisis could impact banking systems in many European countries, including Spain, Portugal and the UK.

Image: A child waves a flag of Greece in Athens. Photograph: Reuters