Europe's and Bangkok's loss is turning out to be gain for several other destinations like Hong Kong, Macau, Malaysia and Singapore. Tourists who had travel plans in the following week to Thailand are giving preference to these destinations now due to the political unrest there. 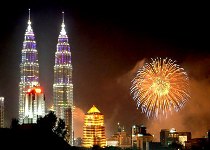 According to travel agencies, there has been a surge of 25 per cent in the bookings for Hong Kong and Macau and about 30 per cent for Malaysia.

"People who had immediate holiday plans can go to these places due to visa-on-arrival facility. Also, in places like Hong Kong and Macau there is something for everyone to do. Their tourism boards have also done a lot to promote these destinations," said Arjun Sharma, managing director, Le Passage to India.

Beside this, there has been an augmentation in the air capacity for Hong Kong and Macau. With flights like Jet Airways, Cathay Pacific and Kingfisher, flying to these destinations has become easier, which is also one reason that many travellers are choosing to these places.

"The cancellations for Bangkok today have increased from 30 to about 60 per cent. As a result, people are opting for other destinations and those who had a package deal for Singapore and Thailand are now extending their stay at the former location and giving Bangkok a complete miss," said Sabina Chopra, co-founder, Yatra.com.

Macau's tourism board has been promoting the destination in India through various events and trade fairs. Travellers combine Hong Kong and Macau to get more value for money.

"Hong Kong is the most preferred destination for a family package because of Disneyland and shopping opportunities. We have increase of around 40 per cent in Hong Kong and 60 per cent in Dubai as compared to last year," said Ashish Bhasin, director- operations, Travelchacha.com.

"The overall outbound travel in India should grow by 18-20 per cent this year. With air capacity going up and disposable income rising there will be growth," said Subhash Goyal, chairman of Stic Travel Group.