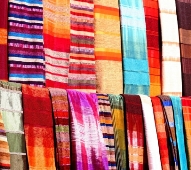 Handicraft goods, silk, woollen yarn, fabrics, jute and cotton yarn were among the items that saw the worst decline in exports when the global downturn struck, according to official data.

According to latest figures, exports of some jute items -- such as yarn -- dropped by over 48 per cent from April to January, 2009-10.

However, the export of raw cotton (which has now been restricted), man-made fibres, silk waste and garments of man- made fibre helped contain the overall slippage.

With the revival of demand in Western markets, industry and government officials expect the sector to grow up to $24 billion in 2010-11.

"Business enquiries are coming again and we see an increase in demand from the US in the coming months," Federation of Indian Export Organisations president A Sakthivel said.

Demand is slowly picking up in new markets like South America and Japan, he added.

Source: PTI© Copyright 2021 PTI. All rights reserved. Republication or redistribution of PTI content, including by framing or similar means, is expressly prohibited without the prior written consent.
Related News: Sakthivel, South America, Japan, US
Print this article