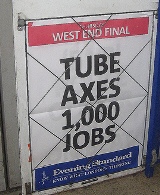 Outlining the 'slash and burn' measures in the House of Commons, Chancellor George Osborne said at least 83 billion pounds need to be saved during the term of the current parliament until 2015 so that along with tax rises, Britain's deficit of 156 billion pounds can be eradicated.

Millions of people who were glued to their television screens soon realised that the jobs they were doing would soon be lost.

"It is a hard road, but it leads to a better future," Osborne told lawmakers in a long anticipated statement to outline the coalition government's long-term fiscal plans.

These included many Indian-origin professionals working at various levels of the economy in Britain, including universities whose funding has taken a major hit. Osborne said: "Today is the day when Britain steps back from the brink, when we confront the bills from a decade of debt. It is a hard road, but it leads to a better future."

According to him, the reform plans would restore "sanity to our public finances and stability to our economy". Osborne did not announce cut in British aid to India, but said the Department for International Development will "change the way it delivers in order to achieve maximum impact with the aid the UK provides, and to further improve transparency and accountability."

He, however, announced the closure of aid programme in China and Russia so that aid could be focussed where it was needed the most. A new Independent Commission on Aid Impact will assess all ODA spending to ensure best value for money and effectiveness in all programmes, he said.

Osborne' measures will lead to as many as 500,000 public sector jobs losses, severe cuts in welfare and many government programs scrapped or suspended halted. In these days of austerity, he said even Queen Elizabeth will need to cut her costs, and announced that the royal household budget will be cut by 14 percent over four years under the plans.

Many London-based diplomats in the Foreign and Commonwealth Office will lose their jobs under a 24 per cent cut to the foreign ministry's budget.

The BBC also took a hit with Osborne announcing that the corporation will henceforth bear all costs of the World Service, which was so far substantially funded by the Foreign Office.

Prasun Sonwalkar in London
© Copyright 2021 PTI. All rights reserved. Republication or redistribution of PTI content, including by framing or similar means, is expressly prohibited without the prior written consent.